The U.S. Army selects library assistant (I refuse to acknowledge an unskilled desk clerk as a “librarian”, damn it) Joe Bauers (Luke Wilson, Old School) to participate in a suspended animation experiment because he is exactly average in all aspects, along with prostitute Rita (Maya Rudolph, As Good As It Gets).  When the experiment is forgotten, the pair lay in suspended animation for five years, until 2505, when a garbage avalanche frees them.  Joe discovers that in humanity’s nightmarish future, the removal of natural selection allowed the stupid to out-breed the intelligent, leaving Bauers the smartest man alive.  The resulting hell hole is a land where hospitals contain slot machines, the President is a professional wrestler named Camacho (Terry Crews, Terminator Salvation), the most successful film of the year is Ass (featuring a close up of a man’s butt farting for 2 hours), the public water supply was replaced with an energy drink called Brawndo, and nearly everything is ready to break down (or already has).  Bauers attempts to use his relatively superior intelligence to survive in this world, but he mainly hopes to escape to the time machine his idiot of a public defender Frito (Dax Shepard) tells him exists in the deep recesses of an enormous Costco. 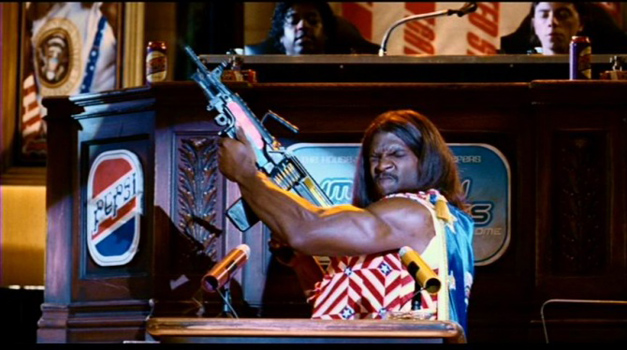 I think President Camacho speaks for himself

Mike Judge (Extract) is a director and writer whose output consistently runs a fine line between celebrating the morons of modern-day America (Beavis and Butthead), celebrating hard-working honest every men (King of the Hill) and bitterly satirizing them (and those who feel they are above them), often in the same film.  While Office Space may be the most successful at accomplishing both sides of this coin, Idiocracy earned a large cult following with its broad indictment of  modern American popular culture, diet, and values.  Unfortunately, for every joke that lands on target in Idiocracy, several others fall flat.  Some are just not particularly funny, some seem too mean spirited or bitter, and some ring too true.  While it’s safe to say that Idiocracy is less speculative sci-fi and more satire, at times it was hard to not think about just how ridiculous/silly/unbelievable the set-up is.  To use a mild example, since the rampant broken systems lead to death in the world of Idiocracy….wouldn’t these very broken systems reinstate evolution?

That’s a petty concern, and let us brush it aside for now, with the immortal words of the Mystery Science Theater 3000 theme song:  “Just repeat to yourself it’s just a show.”  Hopefully at least some of the satire here is directed at the people who really do fear and loathe the “idiots” who make up the great unwashed.  Certainly the crediting of the high IQ couple in the beginning as “Yuppie Woman” and “Yuppie Man” points to the fact that they really aren’t supposed to be mourned/celebrated, but are part of the problem.  There are hints, too, dropped here and there, such as the lines about modern medicine curing erectile dysfunction and hair loss rather than the real problems of the day, that also point to this.  Generally, Judge seems to be an enormous misanthrope, and this film is no exception, though it is disappointing that once again his female characters are (in this case) out-and-out prostitutes, and, while no one gets off the hook here, women seem worse off than the men.  Idiocracy is occasionally very funny, and very dark, satire, but there are too many weak jokes and dull moments (not to mention obvious points) for it to be great satire.  Once again the viewer is left to wonder if Judge actually likes anyone, or believes anything, and, if he does, exactly what that is.