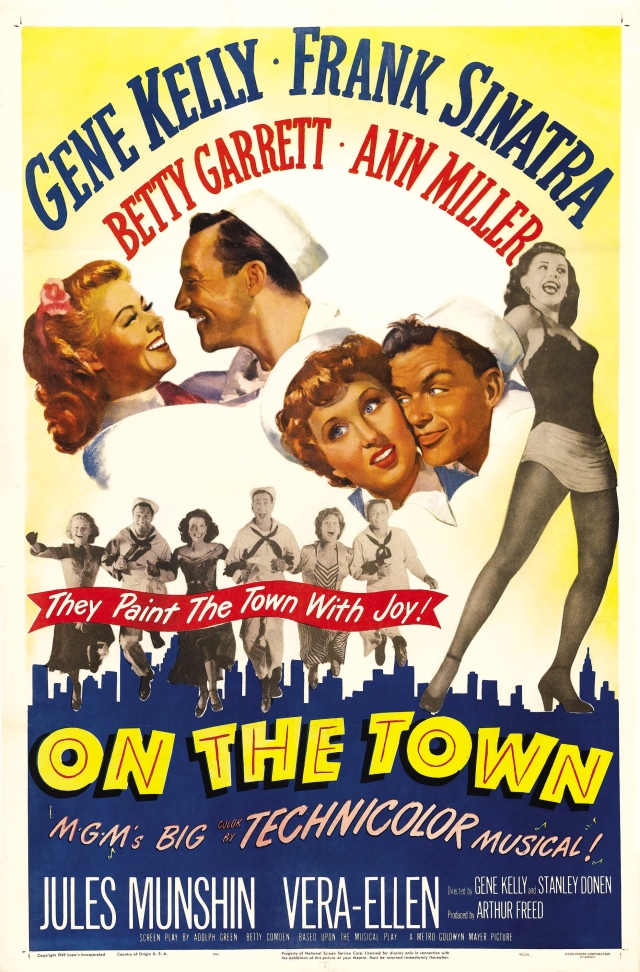 What It’s About: Three sailors are given 24 hours shore leave in New York City. Ladies man Gabey (Gene Kelly) and goofball Ozzie (Jules Munshin) plan on finding girls, while Chip (Frank Sinatra) just wants to see the sights that he promised his grandfather to see.  The day goes differently than each planned.  Gabey sets his sights on Miss Turnstiles (Vera-Ellen), a subway pin-up girl, getting his friends to help him try to find her so he can make a date with her.  Cab driver Hildie (Betty Garrett) takes a shine to Chip and won’t take no for answer, driving the men around and helping with their search for Miss Turnstiles, while Ozzie meets Anthropologist Claire Huddesen (Ann Miller), who can’t wait to examine what she believes to be a genuine caveman specimen.  It isn’t long before the three couples are out On the Town, with the cops one step behind them…

Why Watch it Today?: Star Gene Kelly was born today in 1912.  Although Singin’ in the Rain may be his most beloved picture, he considered this film to be the peak of his talents, a rollicking good time full of amazing dance sequences, from Kelly and his co-stars, especially Ann Miller and Vera-Ellen.

Where to Get It:  Watch online at Amazon, iTunes, Youtube, Libraries, or Netflix (rental)