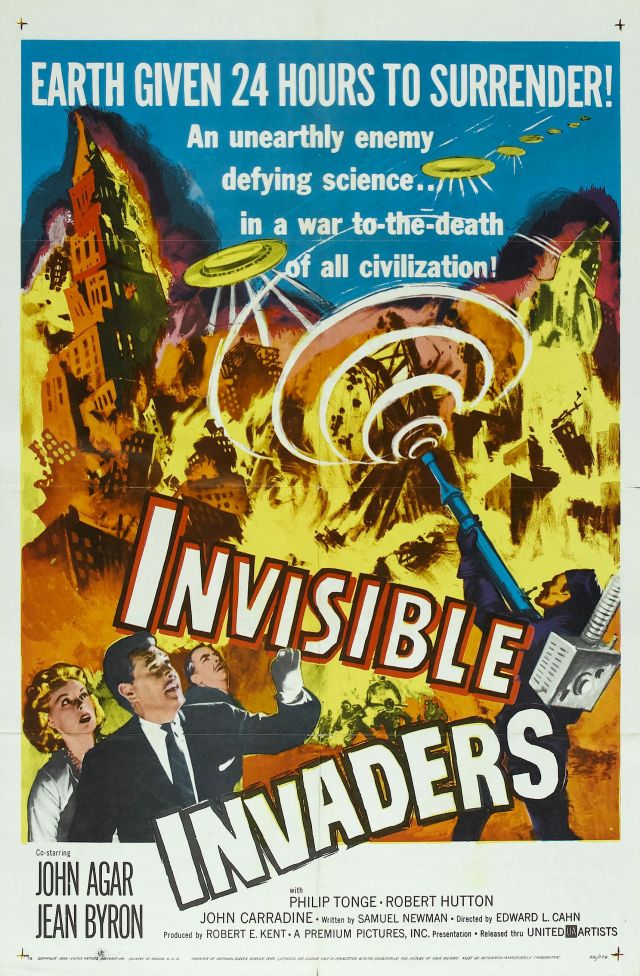 After atomic scientist Dr. Karl Noymann (John Carradine) dies in a lab accident, a strange thing happens:  he shows up, alive, on the doorstep of his colleague Dr. Penner (Philip Tonge).  Noymann explains to Penner that he’s actually an invisible alien possessing Noymann’s body, and he’s here to deliver a warning:  if Earth doesn’t stop developing nuclear weapons, his moon-based race will possess the bodies of our dead and make war on Earth.  Penner delivers the message, but he’s laughed at, at least until the aliens possess a plane crash victim and pilot him to the announcers booth at a hockey game, where he again delivers the Earth an ultimatum.  International authorities decide to fight back, and the invaders make good on their threats, using the bodies of the dead to commit acts of sabotage and destruction.  In response Earth gathers its top scientists in secure locations to try to find a way to defeat the aliens.  Air Force Major Bruce Jay (John Agar) escorts Penner, his daughter (Jean Byron), and her fiancé, Dr. John Lamont (Robert Hutton) to a bunker designed to survive a nuclear war.  Can anyone find a way to stop the Invisible Invaders?

Gives new meaning to the phrase “Death by Chocolate (Syrup)”

Invisible Invaders is proof that Plan 9 From Outer Space owes its infamy not to its premise, but Ed Wood’s off-kilter execution.  Edward L. Cahn (The Invasion of the Saucer Men) uses the same basic materials-stock footage, sub par actors, slumming old horror actors-to make a solid genre film.  Yes, it’s painfully obvious that the narration covers some of the cost cutting measures, and possibly production difficulties (there’s at least one scene in which the cast goes on talking while our narrator drones out exposition).  Yes, there’s a lot of SCIENCE!, such as when our heroes whip up a plastic spray gun so they can coat one of the bodies of the dead and trap the alien inside so that they might study it.  Yes, the exciting premise of aliens using dead bodies to wage a war which brings the world to its knees is represented by stock footage and expository narration, but even with all these drawbacks, Invisible Invaders is entertaining, direct, and, at times, even atmospheric and tense, something Plan 9 From Outer Space never achieves.

“This year, you will be terrified by Night of the Living Bankers”

Of course, Invisible Invaders lacks much of Wood’s loopy charm, but it is a vital link between Wood’s version of aliens resurrecting the dead and George A. Romero’s Night of the Living Dead, which, as much as he seems to want to forget, includes lines about a Venus probe bringing a strange radiation to Earth.  Watching Invisible Invaders with this in mind is fascinating; made just nine years before Night, and despite massive differences in the tone of the two films, there are  more similarities than you might expect.  Invaders features a scene where the leads are confronted by a farmer who wants their Jeep, and tries to take it by force, as well as the leads arguing in a confined place surrounded by the dead.  There’s also several scenes of zombies in suits stumbling along the countryside, an image strikingly similar to Romero’s, leaving the eternal plantation slaves of Haitian mythology far behind.  Then there’s radiation:  the zombies are radioactive, and can be tracked by the radiation, just as in the original Night the explanation strongly hinted at is radiation for a returning Venus probe-how different is that from radioactive aliens from the moon?

Despite the polished look of much of Invisible Invaders-this is a movie that looks like a movie, without the verisimilitude Romero’s small city  commercial film background in shooting on location and his use of unknown actors afforded-there’s never any attempt to mount anything like Romero’s scenes of crowds of zombies attacking, or any real attempt to show us the scope of the fighting, but perhaps that is to be expected in a low-budget independent feature made in Hollywood for the drive-ins.  Although Cahn is professional enough to deliver a good-looking film, even if every cost cutting measure seems to have been employed (my favorite was the “plane crash in Syracuse” that used footage of a remotely controlled B-17 crashing into a desert hill).  Romero, operating on his own, had the luxury of taking more time, and the passion to do it, and it shows.  He is also more creative:  while the narration and stock footage here serve the same purpose as Romero’s news bulletins, setting the scene and ratcheting up the tension, Romero’s bulletins are simply more effective, increasing the feeling of reality, which he heightens further by giving us a far bleaker and more violent scenario.  His ghouls are mindless killing and eating machines, not alien invaders that politely warn us three times before going on the attack, and there is no last-minute solution to save the world.  The bunker setting of Invisible Invaders also prefigures Romero’s Day of the Dead right down to the conflict between scientist and soldier and the need to procure test subjects despite the great danger.

While Invisible Invaders is neither as good as Night of the Living Dead, nor as amusing as Plan 9, it’s a fun B Movie in its own right, with plenty of atmosphere and mood mixing with laugh out loud moments.  It’s a must for anyone interested in the history of zombie movies and fans of 50s sci-fi/monster movies.