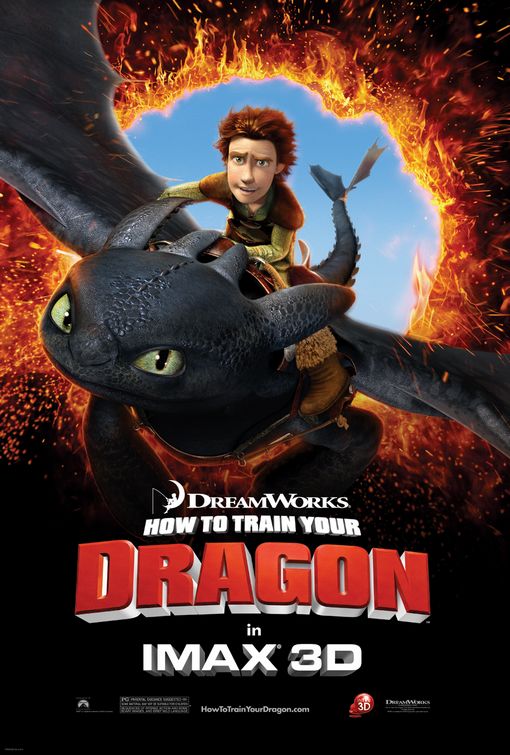 How to Train Your Dragon follows Hiccup (Jay Baruchel, Tropic Thunder), the misfit son of Stoick (Gerard Butler, 300).  Stoick is the chief of a village of Vikings that is constantly at war with the many and varied dragons that live to their north.  The two groups wage a seemingly endless war, with the Vikings entire culture based around raising their children to fight and kill dragons-both defensively, and on more offensive raids where they search for the dragons’ home.  These raids are terribly ineffective.  Hiccup, naturally, does not fit in with the rest of the Vikings-he’s small, clumsy, and not terribly aggressive, though he does hope to live up to his father’s legacy (and impress his crush the fierce Astrid (America Ferrera, Ugly Betty) by killing the most legendary kind of dragon, a night fury.  Night furies are jet black, never seen, incredibly fast, with a powerful flame attack.  When Hiccup manages to hit a night fury, no one believes him, but he soon finds the night fury-whom he dubs Toothless-and discovers that not everything his people believe about dragons is true.

Hiccup begins training the wounded Toothless, all the while hiding his activities from Gobber (Craig Ferguson, Saving Grace), the legless, armless weapons master who is training the Vikings who are just coming of age to kill dragons.  As Hiccup’s knowledge of dragons grow, he goes from being the worst Viking in the class to being the best, able to use the knowledge he’s gained to defeat the dragons without killing them.  This only brings everyone’s attention to him-so can he manage to impress his father, while saving his pet dragon Toothless?  Can he stop the suspicious and jealous Astrid from finding out what he’s up to?  Can he help end the war between the groups?

How to Train Your Dragon is a beautifully animated, and fun, kid’s film that is best not to think too deeply about.  If you begin to think you’ll wonder why all the children speak with American accents and are stereotypical American (dare I say Californian?) children, while the adults are Vikings with Scottish accents.  You’ll wonder how any village could possibly survive this sustained attack by dragons, or exactly how the dragon colony would work, or how a society based on fighting an enemy could ever end that war.  No, just sit back and enjoy the cat-like cuteness of Toothless, the amusing moments, and the beautiful animation, and, to avoid thinking, just keep repeating to yourself:  It’s only a Dreamworks flick, it’s only a Dreamworks flick, it’s only a Dreamworks flick.  It is also worth mentioning, that the actors are well cast and do a good job, and that the story, for all that it strictly follows animated children’s film formula, it does so with a sense of fun intact.