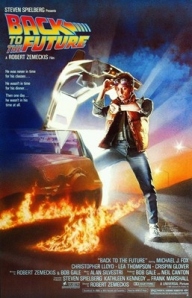 What It’s About: High school student, Marty McFly (Michael J. Fox), is considered something of a slacker, a trait allegedly inherited from his father, George (Crispin Glover), though Marty manages to have a girlfriend and front a rock band.  One distraction is his friendship with the town eccentric, Doctor Emmett Brown (Christopher Lloyd).  Late one weekend night, Marty arrives at the empty parking lot of the local mall at the behest of Doc Brown to discover that Doc has built a time machine . . . out of a DeLorean, and Doc wants Marty to videotape its first trial run.  Things don’t quite go as planned when a van of terrorists arrive with a score to settle with Doc.  In the ensuing battle, Marty accidentally activates the DeLorean and sends himself back to 1955.  Once there, he must convince Doc to help him return to his own time, while trying not to disrupt events that lead to his own timeline.  Things get complicated as he interacts with younger versions of his parents, local bully, Biff Tannen (Thomas F. Wilson), and the ageless Principal Strickland (James Tolkan).

Why Watch It Today?: On this day in 1955, Doc Brown fell and hit his head, resulting in a vision of the flux capacitor that makes time travel possible.