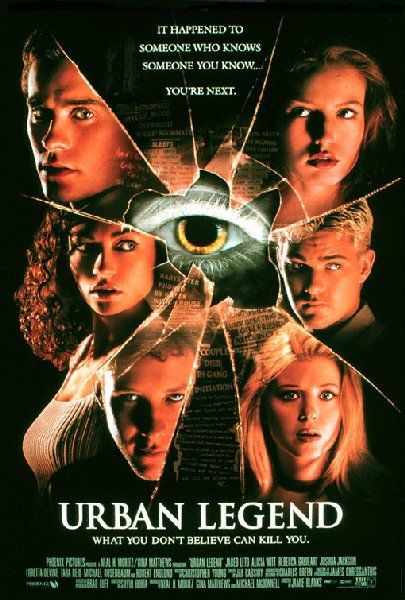 What It’s About: When a series of murders occur at Pendelton University, Natalie Simon (Alicia Witt) believes that they are somehow related to the folklore class she is taking, and the urban legends that fascinate her Professor (Robert Englund).  Can she, with the help of her friend Brenda Bates (Rebecca Gayheart) and driven campus newspaperman Paul Gardener (Jared Leto) get to the bottom of things before it’s too late?

Why Watch It Today?:  Legendary (get it?) folklorist Jan Harold Brunvald was born today in 1933.  Brunvald wrote many books on the subject of urban legends, and eventually wrote the Encyclopedia of Urban Legends

in response to Urban Legend, which features Natalie consulting the (then) fictional text.  Urban Legend was one of the late 1990s slasher films that sought to cash in on the success of Scream by gathering a cast of then-hot young TV stars for a “post modern” take on the horror film.  Urban Legend fails to make good use of the legends or to create much horror, but Gayheart’s endearing over the top performance and the goofiness of the film make it enjoyable so-bad-it’s-good viewing.

Where to Get It:  Netflix (rental only), public libraries, or Amazon