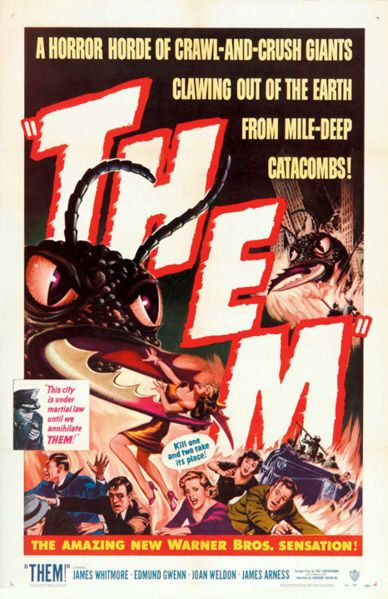 What It’s About: People are disappearing out in the desert in New Mexico, including a FBI agent and his family.  The lone survivor, a little girl (Sandy Descher), is found wandering in the desert in a catatonic state.  Sgt. Ben Peterson (James Whitmore), whose partner is one of the missing, teams up with FBI agent Robert Graham (James Arness) to investigate.  Experts from the Department of Agriculture-Dr. Harold Medford (Edmund Gwenn) and his daughter Dr. “Pat” Medford (Joan Weldon)-arrive but will not tell the men their theory until they know it is correct, because if they are right then the horrible secret must be kept to avoid a panic…

Why Watch it Today?: On this date in 1945 the U.S. exploded the first atomic bomb at White Sands, an event which is part of the explanation of the events of Them!.  Although Them! features Oscar nominated but now goofy-looking special effects and some wonderfully bad  science, the solid performances, deadly serious tone and wonderful build up in the first two acts set the film apart and make it one of the best monster movies of all time.  The basic set-up of Them! was used again and again (many elements show up in Aliens), but it was rarely, if ever, done better than it is here.

Where to Get It:  Watch it at iTunes or Netflix or Buy or Watch it now at Amazon.com