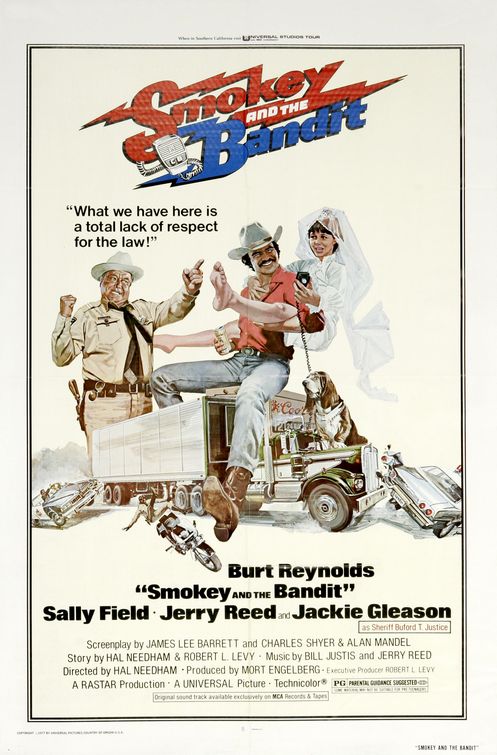 What It’s About: Big Enos Burdette (Pat McCormick) and his son Little Enos (Paul Williams) hire the Bandit (Burt Reynolds) to smuggle a truckload of Coors from Texas to Georgia (then an illegal act), over 1300 miles in 28 hours.  They give the Bandit a Trans Am, which he will use to run interference for his friend Snowman (Jerry Reed), who will be driving the truck.  The Bandit complicates matters when he picks up Carrie (Sally Field), a runaway bride whose groom-to-be (Mike Henry) just happens to be the son of hard ass Smokey (CB slang for highway patrolmen) Buford T. Justice (Jackie Gleason).  Can the Bandit deliver the Coors while Smokey is hot on his tail?

Why Watch It Today?:  Today is International Beer Day, and you could celebrate with fine beers, but since it’s August, why not celebrate with that great American lawnmower beer, Coors, and this Drive-In classic?   Smokey and the Bandit was one of, if not the, most successful films in the redneck car chase sub-sub-genre, grossing over $125 million dollars at the box office (and that’s 1977 money; adjusted for inflation it’s almost $450 million dollars and the 64th highest grossing film of all time).  For better or worse, the success of Smokey and the Bandit lead to two sequels, director Hal Needham’s career, Burt Reynolds move from drama and action to comedy, and endless rip-offs.

Where to Get It: Libraries,  Netflix, Amazon