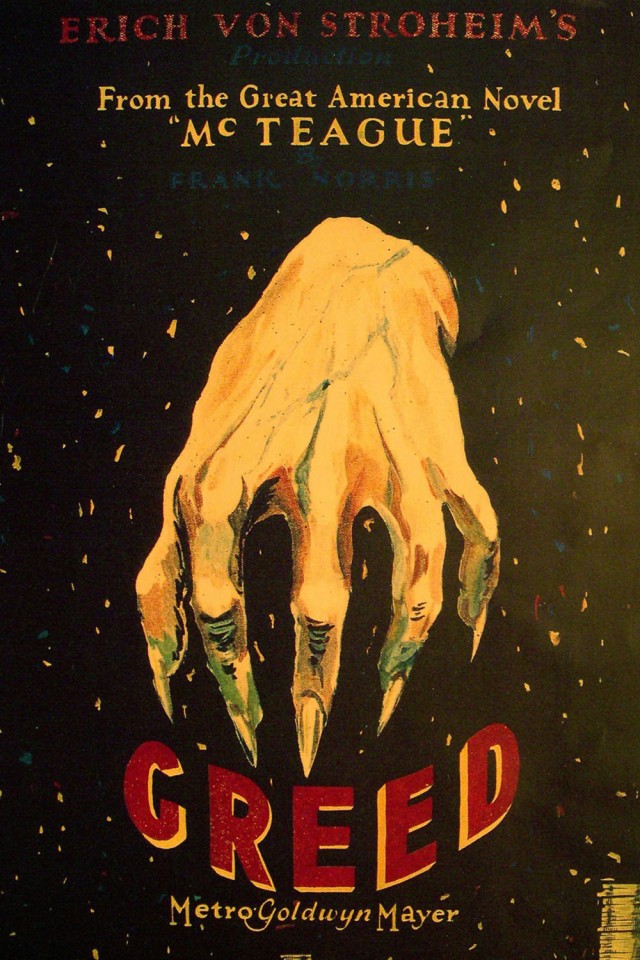 What It’s About:  Simple dentist McTeague (Gibson Gowland) meets Trina (Zasu Pitts) when she comes in to have work done and courts her.  The couple are married, but Trina’s lottery win turns her into a miser, obsessed with money, an anxiety that is only reinforced when McTeague is stripped of his license to practice after former friend and rival for Trina’s affections Marcus (Jean Hersholt) informs the state of his lack of formal education.  The couple begins a long and horrible decline that ends in madness and murder.

Why Watch it Today?:  Actor, Director, and Hollywood legend Erich von Stroheim was born Erich Oswald Stroheim in Vienna today in 1885.  Stroheim rose to early fame as an actor, playing Prussian aristocratic villains in Hollywood’s Great War propaganda films.  Stroheim fabricated his title, military service, and aristocratic background; in reality he was the son of middle-class Jewish hat makers, but it didn’t matter in Silent Era Hollywood, where many made outlandish claims about themselves.  Von Stroheim moved from acting to directing, where he became known for his salacious (for the time) themes and his unheard of film lengths.

Today’s film, for example, based on the novel McTeague, originally came in at just under ten hours long. Von Stroheim was asked to cut the film, and came back with a five-hour long version, which was then edited down twice by the studio, finally coming in at two and a half hours.  The resulting, heavily edited film isn’t completely coherent, but is fascinating just the same, shot entirely on location in San Francisco and Death Valley (the first film, in fact, to be shot in this way).  There are two restored cuts available, which use stills of the missing scenes to reconstruct the film as originally shot.

The opening of the TCM restoration of Greed: