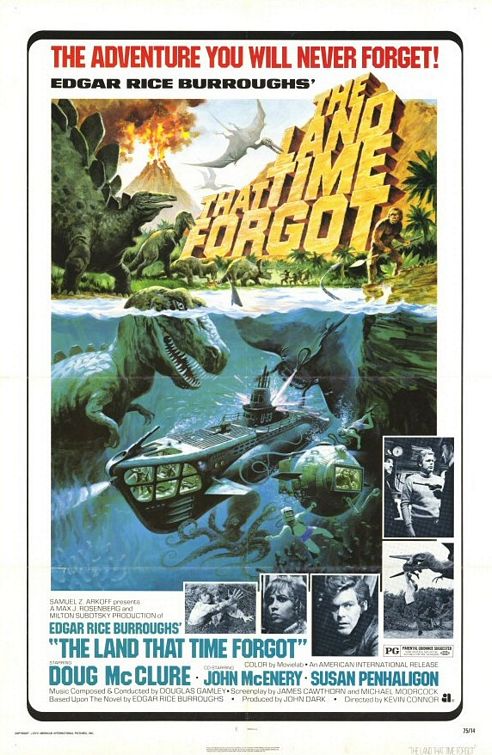 What It’s About: During the Great War, a German U-Boat sinks a British ship, taking the survivors aboard.  The submarine’s crew and the survivors struggle for control of the boat, taking them far off course.  They find themselves on an uncharted island full of dinosaurs and cavemen separated into different regions which correspond to different eras of the world’s history.  Can the German and British groups unite long enough to defend themselves and repair and refuel (using a naturally occurring oil source) the submarine and make good their escape?

Why Watch it Today?: Lead Tyler Bowen (Doug McClure) begins his narration by stating that the date is June 3rd, 1916.  The Land that Time Forgot was Hammer Studios rival Amicus, better known for anthology horror films, entrance into fantasy/adventure films, a sleeper hit that lead to other adaptations of Edgar Rice Burroughs “Lost World” stories.  A fairly faithful adaptation of the first book in Burroughs’ Caspak trilogy, The Land that Time Forgot benefits from a decent cast and a serious approach to the material, even if the puppet and full size mock-up effects are not quite up to modern or, say, Ray Harryhausen’s standards. The story is interesting enough and the cast game enough that the effects generally add rather than subtract from the fun.  The period setting and the tension between the two groups of survivors put a new spin on the usual “explorers vs. dinosaurs” dynamic of a Lost World film, and its refreshing to see a Lost World story that doesn’t involve a capitalist venture to “bring ’em back alive” but focuses on survival and escape.