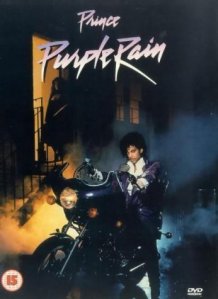 What It’s About: A musician (Prince) confronts the struggles of his life.  At home, his parents marriage is crumbling before his eyes.  There is tension in his band over his complete control of songwriting, and he faces a fierce rivalry with a competing group fronted by Morris Day.  Into all this, a beautiful young woman (Apollonia)  appears, down to her last dollar, hoping to make a musical career of her own in the blossoming scene in Minneapolis.  Will a romance with her bring Prince newfound creativity or serve as an unwelcome distraction?  Or will she chose Morris instead?

Largely, though, the plot just serves to fill space between musical performances by Prince and the Revolution from his latest album at the time, also called Purple Rain, along with a few by Morris Day and the Time as well.  Depending on one’s taste, Morris Day is potentially at least as entertaining as Prince, and does have the best scene in the movie.  His frivolous certainty definitely balances out Prince’s brooding character.

Why Watch It Today?: Prince was born today in 1958, and Purple Rain was arguably the high point of his musical career.  This year is also the 30th anniversary of the film and album.