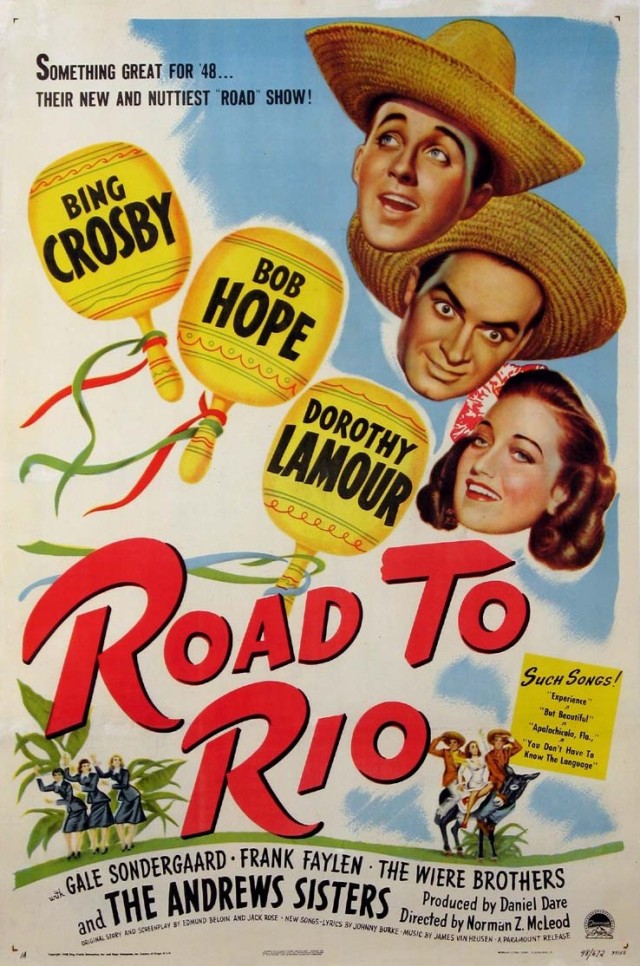 What It’s About: Musicians Scat Sweeney (Bing Crosby) and Hot Lips Barton (Bob Hope) stumble from disaster to disaster while finding themselves more and more bound up with the troubles of lovely heiress Lucia Maria de Andrade.  Most of the movie occurs on a cruise liner to Rio de Janeiro and then in Brazil itself.  Like the rest of the “Road to” series, the comedy is all over the map, from the classic “Patty-Cake” fistfight routines to Bob Hope dancing in full Carmen Miranda drag to an overly long pantomime involving five men in wrong-sized hats.  The Crosby-Lamour-Hope triangle has great chemistry, and some of the supporting cast is first-rate, including the Wiere Brothers as a trio of Brazilian musicians and Gale Sondergaard, who maintains a vicious sneer during her entire screen time as the chief antagonist, Lucia’s evil guardian Mrs. Vail.  The earlier “Road to” movies are a bit fresher, though.

Why Watch it Today?: Get on the road to Rio as the final week of the World Cup kicks off.  The movie opens with the song “Brazil,” which was written in 1939 by Ary Barroso, spawned a new subgenre of samba, and became a huge hit in America.  (It is also the hauntingly memorable theme to Terry Gilliam’s Brazil.)  Music, dancing, love and partying fill the film, showing that even after more than half a century and enormous socio-political changes, Brazil retains the same national reputation.

The original trailer doesn’t seem to be easily available, but this Brazilian edit gives a good feel for the film:

And for a bit of bonus Hope-Crosby antics: