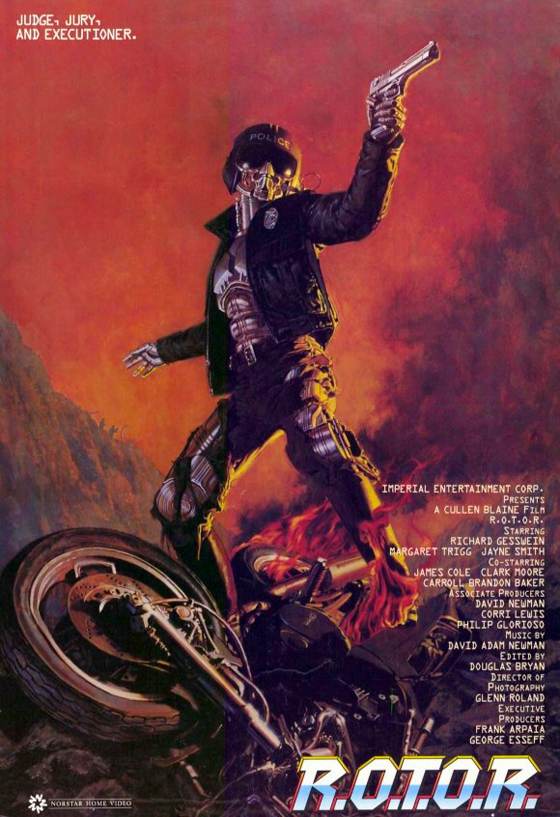 Dr. Coldyron (Richard Gesswein with the voice talents of Loren Bivens) is a maverick Texas rancher, health nut, and robotics scientist working on the R.O.T.O.R. (Robotic Officer Tactical Operation Research), a cyborg intended to solve society’s crime problems.  Unfortunately the man in charge of the research, Buglar (Michael Hunter, Robocop), is skimming money off the project for his own use, and when his corruption is in danger of being uncovered, he demands Coldyron complete his work in sixty days or get out.  Coldyron quits, but his responsibilities are given to his comic relief underling and a comic relief “robot”, because the filmmakers believe one horribly unfunny comic relief character is not enough (the filmmakers responsible for the overrated Pirates of the Caribbean took this kind of overkill to new heights by adding in not one, but two PAIRS of horribly unfunny comic relief characters to a film that featured successfully comic characters). 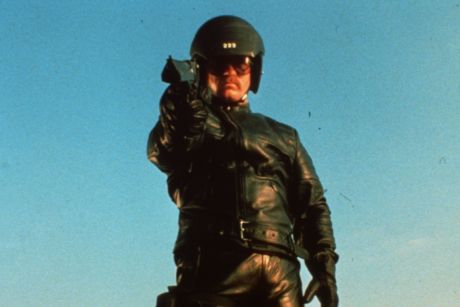 Putting a sophisticated robot crime fighting machine in the hands of an idiot and his wise cracking robot will inevitably result in disaster, and here they are aided and abetted by a “comedic” janitor (because apparently even two horribly unfunny comic relief characters aren’t enough).  That the janitor’s Walkman somehow manages to activate an unfinished robot cop is bad, but the janitor also manages to be the most offensive black servant in film since the Civil Rights era, which the film papers over by making him American Indian.  Yes, he is lazy, stupid, wise cracking, and horny, annoying a female scientist with witticisms such as “once you go red, you never leave bed”.  Once R.O.T.O.R. is activated, it pulls over a couple for a minor traffic violation, kills the man, and begins chasing the woman, Sonya.  He will do this for the rest of the film, as we shift into full Terminator rip-off mode, with Sonya in the Linda Hamilton role, and Coldyron in the Michael Bien part. 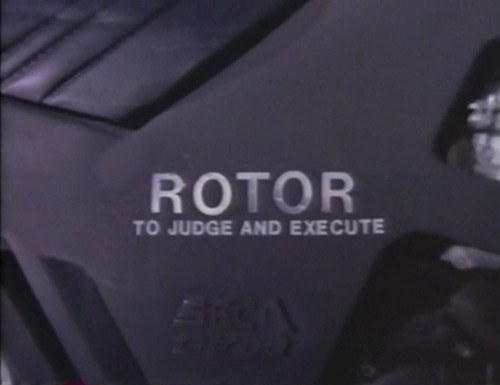 R.O.T.O.R. is one of the most hilariously incompetent attempts to cash-in on the success of Terminator and Robocop to come out of the 1980s.  The shoe string budget is revealed not just in amateur actors and direction (from animator Cullen Blaine, who also co-wrote and produced), but in the locations used for the film (such as a hotel for Coldyron’s research complex), at least one scene with an air pistol passed off as a gun, hair dye that washes out when a character falls into water, and more.  R.O.T.O.R. also features a lead (and later, his compatriot Dr. Steele, played by Jayne Smith, who looks more like a body builder than a scientist) who is dubbed by another actor.  What lead to this decision is unclear, especially as Gesswein is not so physically imposing that it makes sense to cast him rather than someone who could be on-screen and do his own voice acting. 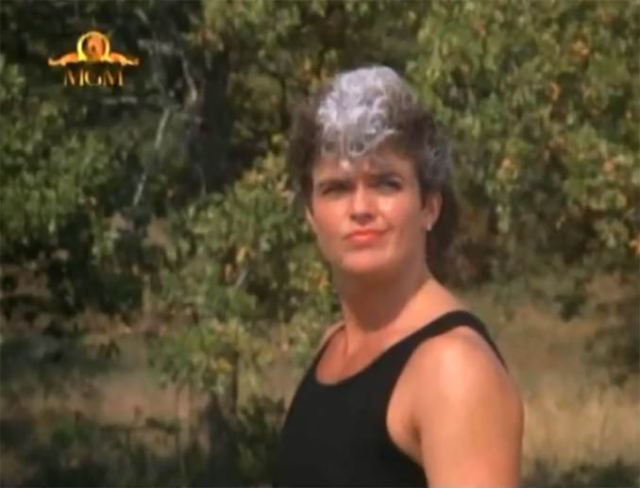 Beyond the budgetary concerns, the film is loaded with the kind of “what the heck where they thinking?” moments that make for classic so-bad-it’s-good entertainment.  For starters, there’s Coldyron’s insane narration and the disconnect between the film’s “CRIME IS GOING TO DESTROY US ALL UNLESS WE MAKE ROBOTS” attitude and the wacky comic relief robots working in the lab.  Coldyron’s technobabble deserves special mention, as it is quite likely the most insane, nonsensical ever committed to film. Ever see explosive cord used for lassoing?  You will.  The film engages in some padding with a goofy, generic date montage, set to truly heinous adult contemporary music.  Finally, there is R.O.T.O.R. himself, played by an unimposing stuntman with a big moustache making one suspect he is a Robo-copped security guard. 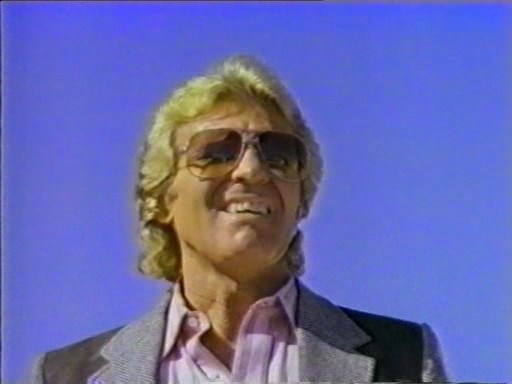 "Last year Mitchell became one of the heroes of our time. Now the hero everyone is talking about is Dr. Coldyron"

R.O.T.O.R. is must-see so-bad-it’s-good entertainment, and it is currently available on Netflix Instant Watch.  All bad movie fans owe it to themselves to check it out.

The best technobabble ever: