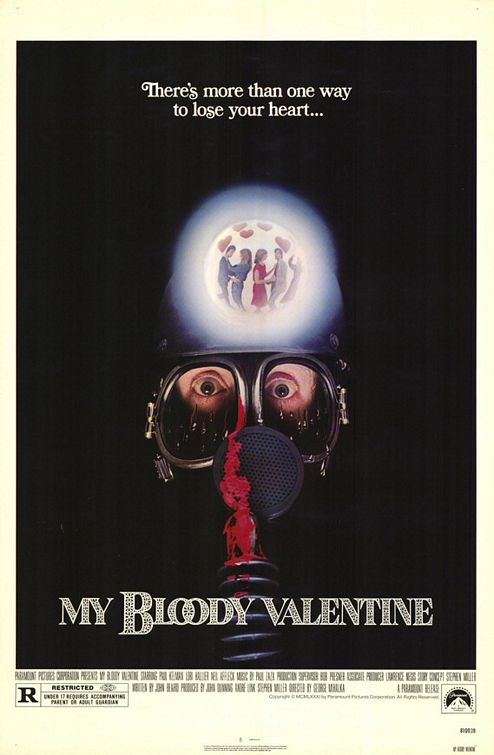 What It’s About: The hard-bitten mining town of Valentine’s Bluff is holding the first Valentine’s Day dance in twenty years.  The town banned the holiday in the aftermath of the killing spree of Harry Warden.  Warden killed the supervisors responsible for a cave-in that killed many of his comrades and left his victims’ hearts in candy boxes at the annual Valentine’s Day Dance.  Now someone is sending heart filled candy boxes to Mayor Hanniger (Larry Reynolds) and Chief Newby (Don Francks), with messages demanding that the Valentine’s Day dance be canceled.  Can Hanniger and Newby find Warden, or whoever is imitating him, before it’s too late?

Why Watch it Today?: My Bloody Valentine is not a great film, but it is an enjoyably quirky one.  One of the scores of films that hoped to cash in on the success of Halloween and Friday the 13th, My Bloody Valentine sets itself  apart in a few ways.  It is firmly rooted in place, shot on location at a real mining town, in a working coal mine.  The mine makes an impressively atmospheric setting for the final confrontation between victims and killer.  The folklore of the killer, while not making all the much sense, feels like the stuff of urban legends.  The holiday theme is well-integrated, from the decorations, to the love triangle subplot, but this is not a  “pro-” Valentine’s Day film, for all you black hearts out there.  Love and Valentine’s Day celebrations, are the root of all the evil events of the film.  Finally, so many horror films feature unlikable, unbelievable people who you can’t wait to see die, but the characters of My Bloody Valentine are likable, reasonably believable, and the actors give it their best.  Avoid the 3D remake which fails to replicate everything that makes this film enjoyable.

Where to Get It:  Watch it at iTunes, Netflix or Amazon