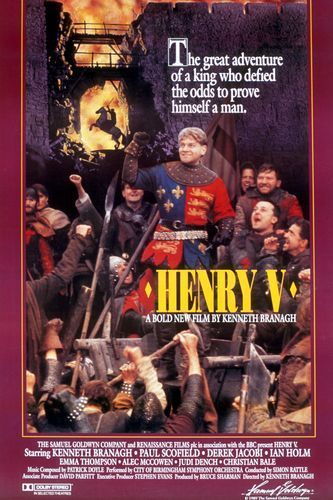 What It’s About:  Young English King Henry V (Kenneth Branagh) is insulted by King Charles VI (Paul Scofield) of France and leads his small army to attest his claim to the French throne, culminating in a confrontation with the far larger French forces at Agincourt.  Can Henry and his men achieve victory?

Why Watch it Today?: The battle of Agincourt took place today in 1415. Although historical revisionists now claim that the English may have faced nearly even odds, Shakespeare’s Henry V tells the version that was English national myth for hundreds of years, and contains what may be the best inspirational speech of all time.  Branagh’s version does the play justice, especially that speech.  With apologies to the Bard:

“We few, we happy few, we band of brothers, for he today who watches this film with me shall be my brother, Be he ne’er so vile, this day shall gentle his condition, and gentlemen on the Internets now abed shall think themselves acursed they were not here, and hold their manhoods cheap whilst any speaks, that watched with us upon St. Crispin’s day!”

Where to Get It:  Netflix, Libraries