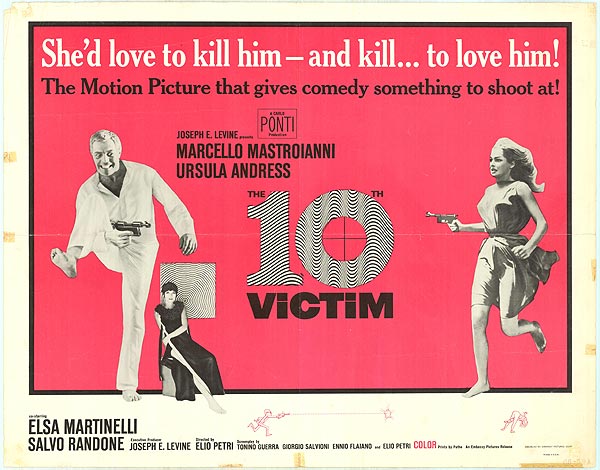 What It’s About:   In the future, a game called The Big Hunt ends conflict by providing contestants a chance to vent their violent tendencies and lower the population by killing one another.  Players alternate between the roles of hunter and the target; after your tenth kill, you’re removed from play, awarded a million dollars and the title of “Decaton”, a group with greater privileges.  Strict rules govern the game, and the action is closely watched by the population, providing spectacle and endorsement deals for successful players.  When reigning champ Caroline Meredith (Ursula Andress) draws playboy Marcello Polletti (Marcello Mastroianni) as her 10th target, who will be the killer and who will be the victim?

Why Watch it Today?:   Italian producer Carlo Ponti died 5 years ago today. Ponti produced a range of films, from Neo-Realist drams like La Strada, to art house classics like Blow-Up, to epics like Dr. Zhivago and everything in-between. The 10th Victim combines satire, Sci-Fi, a battle of the sexes, and campy spy movie elements in a delightful (and at times remarkably prescient) romp.

Other Choices:  Bernard Lee was born today.  Why not watch any of his James Bond films or The Third Man.