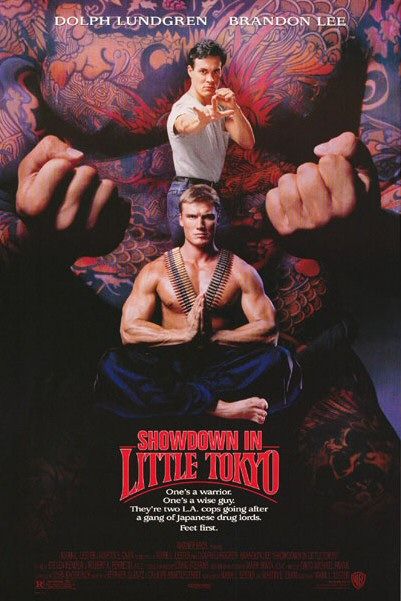 What It’s About: Sgt. Chris Kenner (Dolph Lundgren) grew up in Japan and knows the Little Tokyo beat better than anyone.  His new partner, Johnny Murata (Brandon Lee) is the son of a Japanese woman and an American dentist whose only connection to Japanese culture is studying martial arts.  Together they must work together to bring down Funekei Yoshida (Cary-Hiroyuki Tagawa), the Yakuza Oyabun that’s taking over Little Tokyo and plans to flood the country with the methamphetamine Ice, distributed in bottles of Red Dragon beer.

Why Watch it Today?: Brandon Lee died tragically in an accident on the set of The Crow today in 1993.  While that film went on to big success with multiple sequels, today’s film sank quickly at the box office, but Showdown in Little Tokyo shows off Lee’s sense of humor and deserves to be seen.  Showdown in Little Tokyo is a delicious hunk of “so bad its good” cheese and Lee and Lundgren seem to be in on the joke, making this a must-see for fans of over-the-top 1980s action movies.  Read the full review here.