Sgt. Chris Kenner (Dolph Lundgren, The Punisher) is a cop who grew up in Japan and knows the Little Tokyo beat better than anyone.  Johnny Murata (Brandon Lee, The Crow) is his new partner, the son of a Japanese woman and an American dentist whose only connection to Japanese culture is studying martial arts.  Together they must work together to bring down Funekei Yoshida (Cary-Hiroyuki Tagawa, Planet of the Apes), the Yakuza Oyabun that’s taking over Little Tokyo and plans to flood the country with the methamphetamine Ice, distributed in bottles of Red Dragon beer . 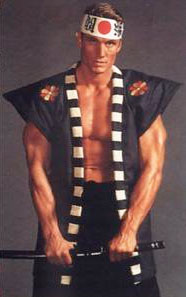 From the Lundgren for Men Collection

Showdown in Little Tokyo, a relic even when released, was one of the last big, over-the-top 1980s-style R-rated action films, loaded with unease with the Japanese and the perceived American decline.  Looking back on it from the 21st century (with America’s current discomfort with the rise of China and India) the paranoia is quaint and fairly amusing, especially since Japan’s economy headed into a recession that it has never fully recovered from even before Showdown in Little Tokoyo wrapped.  At this point, being surpassed by a West-leaning democracy with human rights sounds lovely.

If they had just put “Nin*Ja” on that headband, it would be a Godfrey Ho film.

The Japan paranoia manifests in flashy Yakuza gangsters in horrible late 80s/early 90s suits, Made in Japan logos prominently displayed, Japanese men eating sushi off of naked women, a bathhouse, the horrors of Ice (which “makes crack look like decaf”) and a murderous pervert of a Yakuza Oyabun that does everything but kick a dog.  The Yakuza goons act like film Samurai, with absolute loyalty to their boss (one breaks his own neck rather than talk to the police), quite silly seeming when, even in the 1960s Japanese films depict Yakuza honor as a thing of the past.  Honorable they may be, but smart they are not.  Showdown in Little Tokyo features some of the stupidest ever featured in a film, with Yoshida killing people on camera, shake downs right out in the open, and a repeated insistence in not simply murdering the heroes even though the opportunity continually presents itself. 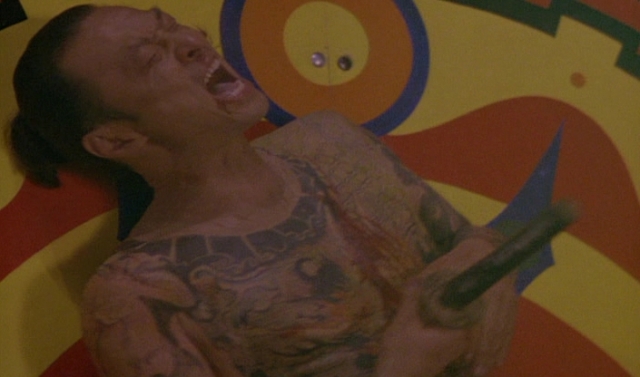 The poor quality of the writing isn’t confined to misrepresenting the Yakuza.  The “cops” behave like vigilantes.  They don’t ever call for back up, we only see them in a police station once, there’s no evidence that they follow any procedure.  There is a weak effort to make Johnny  “by the book”, but this trait is there because it was the style at the time, and to set up for a scene in which Johnny informs a crook he has “the right to be dead”.  Even Murata’s background falls apart with a moment’s thought-his father is Caucasian, but his last name is Japanese.  The idea of the *Asian* partner being out-of-place and the Caucasian being the expert on Japanese culture almost works, but simply making Lee Chinese would have been even better.   Many times the film breaks the laws of physics, with our heroes seeing guns being fired, reacting, THEN ducking, or using flimsy café tables to block bullets.  The writers of Showdown in Little Tokyo use every 1980s action and cop movie cliché no matter how poorly they fit the film.  The direction is little better, with Mark L. Lester delivering over the top but lifeless action sequences, more like his work on Roller Boogie than Commando. 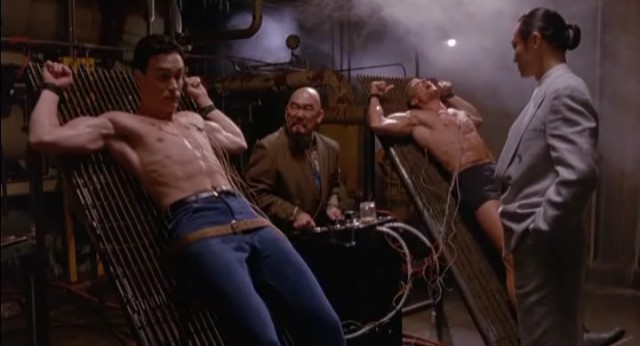 The only saving grace here-besides the films dogged stupidity making it enjoyable on a “So-Bad-It’s-Good” level-is that the cast is game.  Lundgren, as usual, is better than the material he’s given, and in a film where he mostly fights Japanese actors, Lester makes the most of his large stature.  Brandon Lee is even better, taking a thankless “wise guy sidekick” role and making it work, and, like his father before him, upstaging his Caucasian costar in the fight scenes.  Tagawa makes for an appropriately sneering bad guy, and Tia Carrere (Zombie Nightmare) is, well, not exactly good, but still better than the material as a nightclub singer who gets mixed up in all of it.  The film does them no favors, whether giving Lee jaw-dropping lines about Lundgren’s enormous…equipment…that lay bare the underlying homoerotic subtext of the buddy film clichés, or the least convincing sex scene in an action film since we saw Chuck Norris’s hairy shoulders in Silent Rage.  Still, they are commended in playing this junk as straight faced as the ever-reliable Brits did in the worst films of Amicus and Hammer. 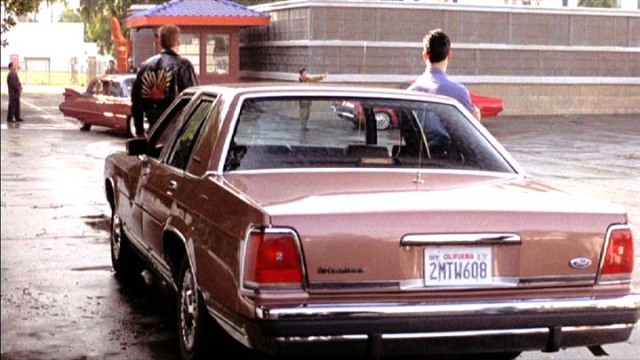 Was there a worse time for cars? Hideous.

Showdown in Little Tokyo is the nadir of 1980s big, R-rated action and Japanese paranoia.  It can not be called a good film in the normal sense, but it is never boring, and often terrible in a very amusing way.