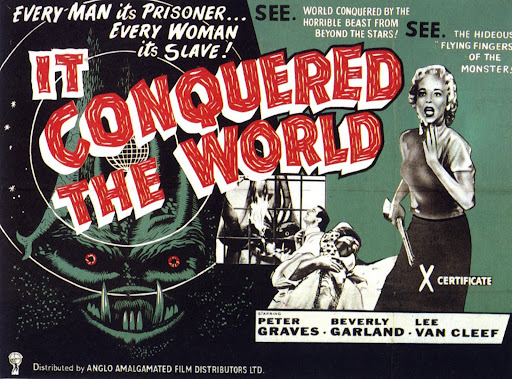 What It’s About: Dr. Paul Nelson’s (Peter Graves) satellite launches aren’t going well, and his friend and colleague Dr. Tom Anderson (Lee Van Cleef) knows why:  aliens from Venus are sabotaging the launches.  When Dr. Nelson discovers Dr. Anderson is not only communicating with the aliens, he’s acting as their Fifth Column agent, can Dr. Nelson figure out what’s going on and stop it-before it’s too late?

Why Watch it Today?: Director/producer and exploitation film giant Roger Corman turns 86 today-a Happy Birthday to a man who has brought fans of horror, sci-fi, trash and the weird in cinema so much joy over the years!  It Conquered the World is classic early Corman, the same kind of alien invasion/mind control sci-fi horror that majors were doing on a much smaller budget.

Where to Get It: It Conquered the World is available in some of those huge “50 Movie” multi-packs, and in its MST3K version on YouTube.

Other Choices: The Masque of the Red Death; Attack of the Crab Monsters;  and many more.