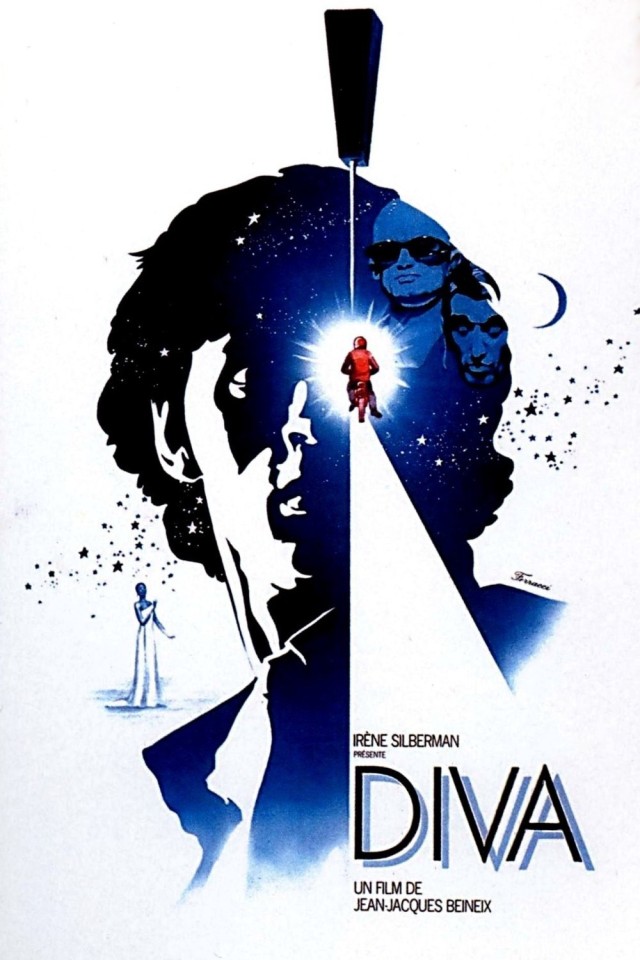 What It’s About: Diva is a purely aesthetic experience.  It is about so much: art, honesty, friendship, love, corruption; it is about so little: accident, death, unbelievable plot coincidences.  Young motorcycle postman Jules has a borderline-stalker-grade obsession for opera diva Cynthia Hawkins.  While surreptitiously recording her performance and stealing her dress, he unknowingly comes into possession of a recording by a prostitute implicating the chief of police in the management of a large drug and human-trafficking ring.  Witnesses are eliminated one by one by a couple of distasteful homicidal pimps who aspire to look like Depeche Mode.  Our spineless hero randomly befriends a young Asian shoplifter and her mildly creepy meditating sugardaddy Gorodish, a gent who looks like the mythical offspring of a union between John Belushi and Robert Downey, Jr.  Jules and Gorodish each inhabit excruciatingly cool lofts, where one can park junked cars or go rollerskating.  Apparently director Beineix had some issues with the French film establishment, but for international audiences, Eighties Paris never looked so alluring as in this film.  Alternately satisfying and infuriating, it is a memorable experience.

Why Watch it Today?: On this date in 1770, Mozart (aged 14) premiered his first opera seria, “Mithridates, King of Pontus.”  It was six hours long.  As a genre, opera seria was not long for this world, but the visceral power of opera more widely has not dissipated.  Diva features two highly discordant musical genera.  On the one hand, you will experience the pure tones of Wilhelmenia Wiggins Fernandez’ operatic range, lovingly recorded.  If you are even mildly musically sensitive they will send chills down your spine.  On the other hand, much of the soundtrack is primitive synthesized electronica, jarring and discordant.  This juxtaposition is actually quite suitable to the plot of the film, where art crashes headlong into crime, meditation into racketeering.

To get a feel for the movie, take a look at any YouTube film of the diva singing; or this odd bit from the guru, Gorodish, on bread:

Alternately, watch the trailer.  I must warn you, however: this movie may, possibly, have the worst trailer ever made.  It manages to give away spoilers for some major plot points without giving any hint of what the movie’s “about,” and is sonically discordant and obnoxious where the film’s soundtrack is actually well put-together.