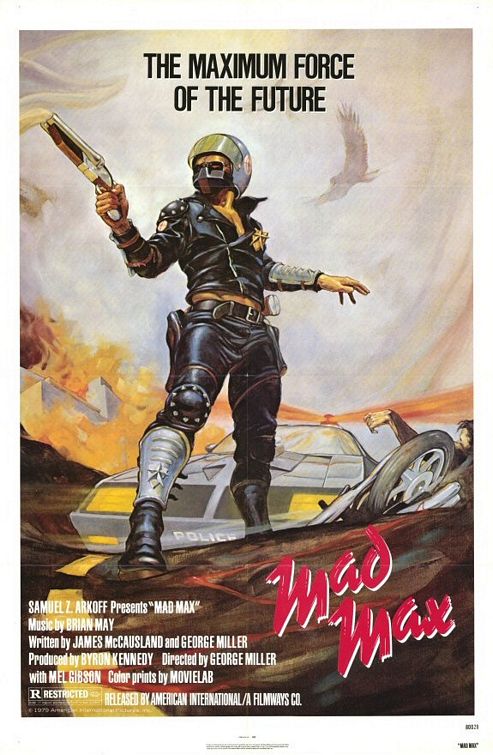 What it’s About: In a near-future Australia, a motorcycle gang threatens a bucolic, unguarded, and automotive way of life. With law and order on the wane, the Main Force Patrol (MFP) is reduced to a daredevil, leatherclad band who differ from the outlaws only by the thinnest of blue line. When gang member Nightrider is killed during pursuit by promising MFP patrolman Max Rockatansky (Mel Gibson), a cycle of tribal and personal revenge is unleashed, toppling the few vestigial structures of justice, compassion, and civilization.

Why Watch it Today: The enduring capacity to shock is a scarce commodity in entertainment. It could be that norms have changed, or we have become desensitized. It may also be that most jolt jobs rely on tricks on marketing, current events, and word of mouth that, after the moment has passed, cannot be replayed. Fortunately for the shock junky, a steady supply of “underground” goods from indie directors and foreign cinemas specialize in ordeals of torture, rape, and dismemberment. As time passes, however, it is difficult to perceive where fringe ends and canon begins. The boundary between “genre” shockers like Oldboy, Se7en, and The Texas Chainsaw Massacre and more canonical taboo-breakers like A Clockwork Orange and Last Tango in Paris is a permeable membrane; quality films like The Silence of the Lambs or Reservoir Dogs seem to cross it freely. My examples are picked arbitrarily from the hat of my limited film sensibility; these boundaries are matters of personal taste that even the loftiest media critic, let alone the wannabe movie blogger, cannot hope to referee. Categorize today’s Movie of the Day however you wish–action flick, shock cinema, or high art. As measured by its influence, budgetary ingenuity, and brute audiovisual force, it is a masterpiece whose aftershocks, thirty years later and counting, continue to reverberate.

Mad Max is so widely imitated and incorporated that it has been woven into the action movie fabric. The blueprint of bloodthirsty gangs, steel and leather, souped up cars, and post-apocalyptic scarcity has touched everything from Robocop to manga’s Fist of the North Star. The criminal anarchy and sadism of Max’s world dangle perilously over action cinema today, coloring Nolan’s Batman trilogy with an especially dark brush–beyond strong thematic echoes, Bane bears more than a huge resemblance to Lord Humungus, the masked villain of Max Max 2.

This film also birthed a superstar. Say what you want about Mel Gibson’s corrosive politics (I guess I just did), the man looks as natural behind the wheel as Clint Eastwood does on a saddle. It’s fascinating to watch Gibson’s youth in this film, his innocence tempered by his statuelike chin and nose and his uncoachable ability to turn his facial expressions like a switch. As today is Australia Day, it is fitting to pay tribute to its most famous son in his breakthrough role that could be set no place else.

George Miller makes brilliant work of his puny budget and no-name cast in his directorial debut, giving the austere Australian outback starring role in shot after shot after shot. While the plot develops predictably, the scenes are unhurried and laden with engine-revving foreboding. Miller repeats his imagery with Shakespearian doggedness, conditioning his viewers’ dread via, for example, repeated variations on an overturned vehicle beached off the shoulder of an endless, empty highway. The award-winning string-heavy score by Brian May threatens the discord of Stravinski without interfering with the visuals; it’s a triumph of Romantic adrenaline all on its own.