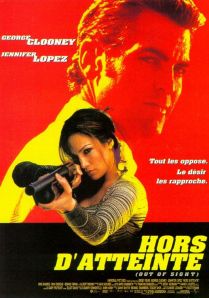 The success of Quentin Tarantino’s early films helped usher in a glut of would-be hip crime movies with the tough guys and gals expected by audiences for as long as the genre has existed being imbued with detailed knowledge of pop culture and cool, unexpected conversations about nothing interrupting the flow of whatever twisted score was going down.  Of course, there’s always been some degree of pop cultural knowledge and referencing in crime films (really, are you going to tell me that interlude where Lauren Bacall sings “And Her Tears Flow Like Wine” wasn’t hip and current when The Big Sleep was released?), and leads whose tongues are as fast, if not faster, than their fists and guns are a staple element.  You don’t read a Raymond Chandler novel or watch a Bogart film just for the plot and action.  The tropes may be updated with more “post-modern” or “meta” moments, but it’s an update not a re-invention.

No, that lipstick never looked good.

Out of Sight is in the top-tier of its generation of crime films.  While it would be unfair to director Steven Soderbergh (Traffic) to classify Out of Sight in the “failed attempt to ‘do Tarantino'” category (see the wretched Things to Do in Denver When You’re Dead for a perfect example of this phenomena), it’s hard to deny that the style QT set was still going strong four years after his breakout film.  Like Pulp Fiction, Out of Sight gives us plenty of flashbacks which gradually allow us to understand the crime plot at the center of the film and the plot is secondary to the opportunity it gives the audience to view a large cast of characters interact with one another, with plenty of witty back-and-forth dialogue.

Sam Jackson cameo, in case you had any doubt this was made in 1998.

Jack Foley (George Clooney, Batman and Robin) breaks out of prison with the help of his partner Buddy (Ving Rhames, Dawn of the Dead).  Unfortunately, as he’s busting out, Federal Marshall Karen Sisco (Anaconda)is dropping off-and the men end up kidnapping her.  In the trunk on the ride the two improbably hit it off, but Karen is not going to stop being a Marshall, so soon she’s convinced the pair’s third partner,  Glenn Michaels (Steve Zahn, Joy Ride), to drive off without them.  The hunt is on, but Foley and Buddy have a big score planned, and soon everyone is in Detroit.  The score connects back to the trio’s time in prison, and brings in more characters, including the psychotic ex-boxer “Snoopy” Maurice Miller (Don Cheadle, Boogie Nights) and white-collar criminal Richard “Dick the Ripper” Ripley (Albert Brooks, Taxi Driver).  Sisco manages to get on the task force that’s hunting for Foley, and the pair continue their romance through a few key “time outs” in their roles as a cop and robber, while Foley and Buddy try to outmaneuver the cops and their fellow crooks. 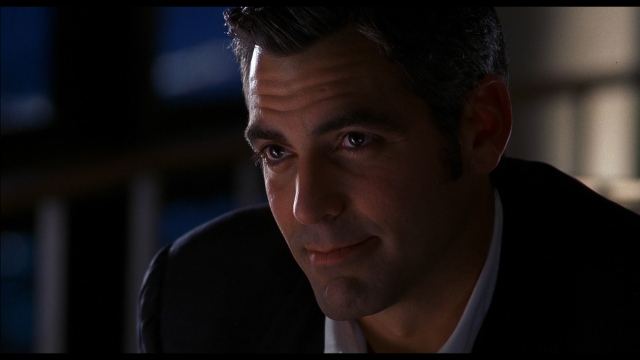 The reason I can almost always guarantee a George Clooney movie will be a hit at my house.

Soderbergh gives the film a polished, sophisticated look and feel that’s punctuated with enough tough guy crime movie moments to keep the film from becoming an odd romantic comedy.  The soundtrack is quite good and suits the action perfectly.  The film is based on a novel by Elmore Leonard (Jackie Brown) and is apparently a faithful adaptation, with excellent dialogue, memorable characters, and some laugh-out-loud moments, while retaining a tough edge when it needs it.  Perhaps this is what keeps the film from becoming an empty exercise in cool like Soderbergh’s later Ocean’s Eleven.  The cast is excellent-full of great character actors like Luis Guzman (The Limey) as a dim Cuban crook, Catherine Keener (Being John Malkovich) as Foley’s ex-wife, Nancy Allen (Dressed to Kill) as Ripley’s maid, and Dennis Farina (Code of Silence) as Sisco’s dad-and the leads are all at their best.  Clooney and Lopez have amazing chemistry in their scenes together, and are at their best-Lopez is actually believable as a tough Marshall with a wild streak and Clooney is charming and charismatic as the street smart but reckless Foley.   Out of Sight is definitely worth the time to watch or re-watch if you haven’t seen it in a long time.