The Coen Brothers are nearly guaranteed critical, if not box office, success.  The closest they’ve come to critical failure are with some their broadest comedies-The Hudsucker Proxy, The Ladykillers, Burn After Reading and Intolerable Cruelty.  This is not to say they haven’t had successful comedies-Raising Arizona comes to mind-but that their misfires tend to be comedies, for what ever reason.  Perhaps it’s because their more serious films play, at times, as the blackest comedies imaginable, or perhaps critics just are less likely to heap praise on a comedy. 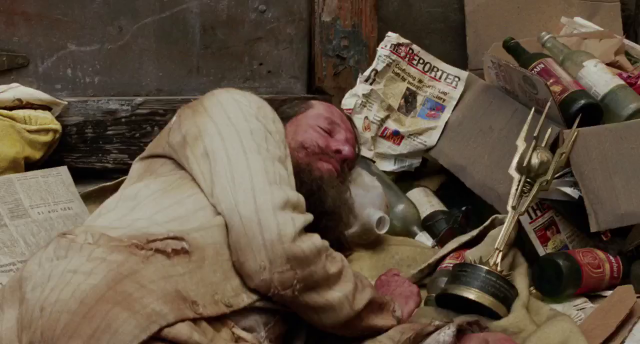 Intolerable Cruelty falls on the high-end of their not-entirely-successful comedies.  It’s a romantic comedy/screwball comedy tribute with the very Coen touch of leads who are, respectively, a legendarily successful divorce attorney, Miles Massey (Confessions of a Dangerous Mind) and an aspiring gold digger, Marilyn (Catherine-Zeta Jones, The Phantom), who meet, where else, but on opposing sides of a divorce case.  After a bravura opening where daytime producer Donovan Donaly (Geoffrey Rush, Mystery Men) comes home unexpectedly to find his wife Bonnie (Stacey Travis, Ghost World) sleeping with the pool boy, leading to an ugly altercation.  We’re introduced to Miles at work when Bonnie tells him of the case and he tests to see just how far he can stretch the truth.  Naturally Miles wins the case handily.

Marilyn, meanwhile, uses private eye Gus Petch (Cedric the Entertainer, Madagascar) to catch her husband, Rex Rexroth (Edward Herrmann, The Lost Boys) in the “act” (it’s questionable whether his story of an open relationship is the truth) and promptly attempts to divorce him.  Rex retains Miles, as Rex needs every penny he has after some ill-advised real estate dealings.  Sparks immediately fly between Miles and Marilyn, though various schemes, crosses and double crosses and legal complications, including Heinz, the Baron Krauss von Espy (Jonathan Hadary, Private Parts), a Texas oil magnate (Billy Bob Thorton, On Deadly Ground), a trip to Las Vegas, and the “unbreakable Miles Massey Pre-Nup”, threaten to keep the couple from coming together.

Intolerable Cruelty exhibits just enough of the Coens’ off-kilter style and sense of humor to keep it from being just another romantic comedy, albeit one with great leads giving fun performances.  The film is a bit too arch and stylized to be considered in the first tier of Coen films, though the plot twists and odd ball characters make this an enjoyable film to watch, a perfect Valentine’s Day film for those who do not go in for the more typical trappings of the holiday and its cloying sentimentality.  The supporting cast is amusing, though Thorton and Cedric the Entertainer don’t quite mesh  with the usual Coen style.  While Intolerable Cruelty is definitely not Grade A Coen, it’s a solid comedy and worth a look for fans of the directors or the actors.