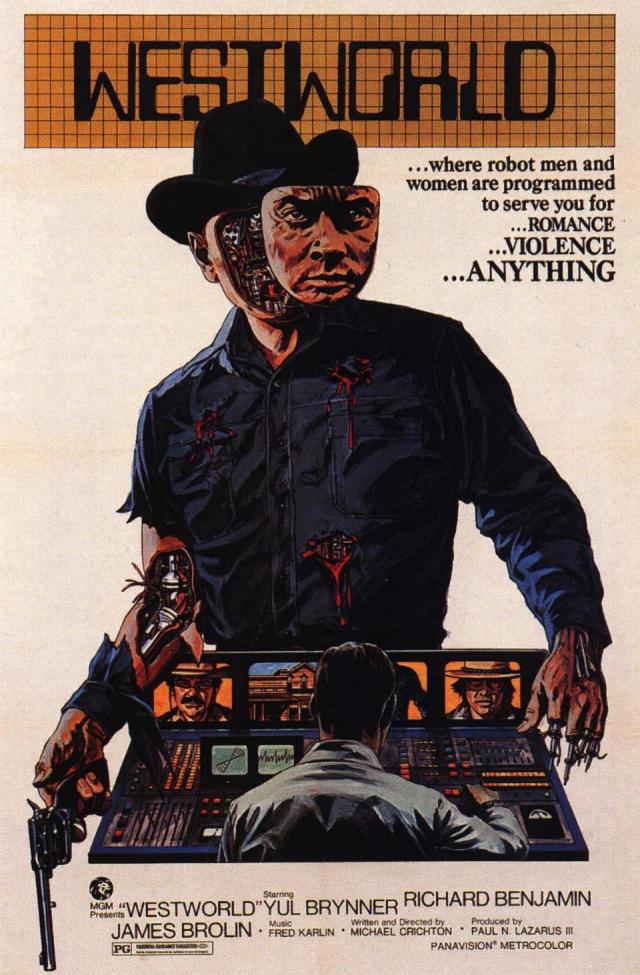 Westworld is an incredibly influential early film from sci-fi author and filmmaker Michael Crichton.  Films as diverse as Halloween, The Terminator and Crichton’s own Jurassic Park owe visual and plot elements to the film (the unstoppable opponent who seems to die and comes back again and again after each time he’s “stopped”, the robotic killer’s POV shots, and the theme park built with SCIENCE! that goes terribly wrong, respectively).  The film doesn’t quite fit into the category it’s often lumped into-the early 1970s dystopian sci-fi films cycle that included films like Soylent Green and Rollerball.  Westworld’‘s world building is limited to the speculation needed for the central conceit:  what if the trend in amusement park rides towards audio-animatronic figures and immersive environments pioneered by Walt Disney led to a theme park that placed guests in “perfect” replicas of past times, complete with robot doubles nearly identical to humans?  Robot doubles that guests could use to fulfill violent and sexual impulses and fantasies?  What if one day those robots turned on the guests?    Aside from a goofy looking hovercraft/VTOL aircraft used to take the guests to the park, the robots, and some big control rooms, we get precious little evidence that the world of Westworld is, in fact, any different from our world at all, right down to the hideous 70s fashions.

This is the slim premise of the film.  The concept of the theme park, Delos, is introduced by a TV ad which tells us about it through interviews with excited guests. There are three “worlds”-Romanworld, Medievalworld and Westworld.  Experienced guest John Blane (James Brolin, Capricorn One) takes his friend and first time visitor Peter Martin (Richard Benjamin, Saturday the 14th) to Westworld for a little R+R.  Other guests include a banker (Dick Van Patten, Spaceballs) and an older couple who separate and go to Romanworld and Medievalworld.  Martin is reluctant, at first, to get in the spirit of the park, or to partake in its more sinful pleasures of gunfights and prostitutes (Majel Barrett of Star Trek fame plays the robot madame Miss Carrie), but eventually he comes around to Blane’s view that this is all in good fun.  The banker becomes the town Sheriff, while the man of the older couple seduces the queen and prepares to fight the Black Knight.  Meanwhile, a concerned member of the park’s staff notes the increasing number of central processor errors spreading like a virus through the robots, from Romanworld to Medievalworld and finally to Westworld.  The robots begin attacking the guests- can Blane, Martin and the other guests survive?  Can the staff of the park save them before it’s too late?

Westworld spends a surprising amount of time setting up the park and showing the pleasures the guests enjoy while hints of problems slowly reveal themselves.  While the approach isn’t entirely successful-we really only get to know Blane, Martin, and Westworld, and the viewer knows what is coming-it does allow us time to question the morality of robot murder and robot sex.  Unfortunately it also gives us a long time to think about some of the problems with the concept-just how would any park like this turn a profit, even at $1,000 a day per guest?  The guns’ heat sensors prevent guests from shooting each other on purpose-but what about wild shots, and how do you make weapons like swords accident proof?  Delos has created sex robots but can’t create convincing hands?  There are more questions, and too much time to ask them.  When the robot rampage comes, it’s relatively restrained, but the really influential section-the leads vs. a gunslinger robot (appropriately and effectively played by Yul Brenner of Magnificent Seven fame) is quite good, though compared to the lengths the films that followed took this idea, the conflict seems a little tame.  While the limited robot effects are good and the sets for each “world” work well enough, the brief VTOL/hovercraft scenes look clunky, so perhaps it’s better that Crichton chose to keep his future familiar.  What doesn’t work very well are the scenes of the support staff arguing about what is happening to the robots and what to do about it-they deliver no answers, and their ultimate fate is quite silly.  Still, the film moves by at a decent clip, the three lead actors are good, and the concepts are solid, making Westworld an entertaining if not entirely plausible example of 1970s sci-fi.