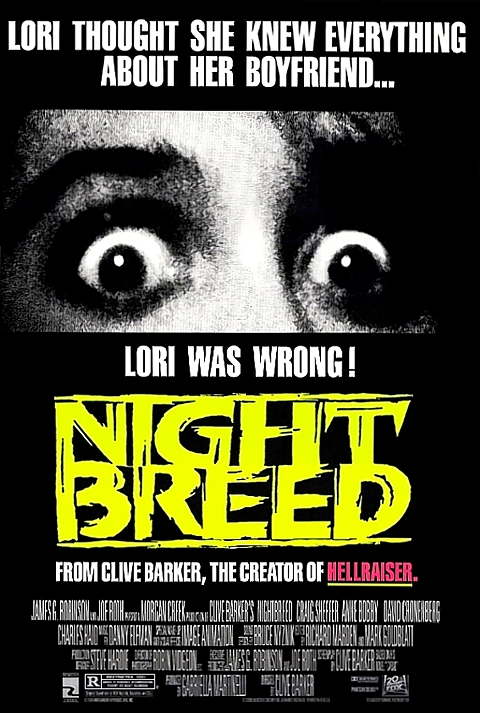 Aaron Boone (Craig Sheffer, Some Kind of Wonderful) is a troubled youth who dreams of Midian, a place where he believes the monsters live and all sins are forgiven.  When Boone’s creepy psychologist Dr. Philip K. Decker (David Cronenberg, Blood and Donuts) gives him hallucinogens, Boone winds up in a hospital psych ward, where he meets Narcisse (Hugh Ross, Sharpe’s Battle), an actor who wants to kill himself because he can’t make it to Midian.  He knows where it is, and tells Boone, and then he begins to cut the skin off his own face.  Decker arrives with a police detective, Joyce (Hugh Quarshie, Highlander) and Boone escapes in the confusion.  At Midian, he meets monsters-a red one with dreadlocks that wants to eat him, and a moon-faced one that warns it’s against the rules.  The red one bites Boone, but then the police show up, very heavily armed, and gun Boone down (after Decker claims Boone has a gun).  Boone wakes up in the morgue changed.  He is no longer “alive” in the human sense, and he escapes and makes his way back to Midian.  The society of freaks and outcasts that lives there is skeptical at first, but eventually initiates Boone into their group and he discovers his monstrous side that comes out when he’s angry.  Boone’s girlfriend Lori (Anne Bobby), confused about her boyfriend’s death and “disappearance” from the morgue, goes to the area Boone was found in to find out why he went there, finds Midian, and begins to complicate things….because Decker is following her, and he wants nothing more than to destroy Midian and is very good at manipulating the authorities into doing what he wants…

“It’s kind of like Little Monsters with more gore”-Mr. Farrell

Nightbreed is an odd film.  Coming at the tail end of the 1980s horror boom, the film’s producers undoubtedly thought “Clive Barker=Hellraiser=Freddy Kreuger with pins instead of burns” and were probably disappointed when Barker turned in what amounts to a more violent version of The Vampire’s Assistant, with yet another societal outsider finding his way into a secret society of monsters, then discovering that he is a prophesied “chosen one”, while being chased by someone he knows in the real world who gathers the opposing forces to destroy his new friends.  The film suffers from post-production tinkering, in which the producers cut nearly a half hour of footage.  Some of the cuts were to the film’s more outlandish and elaborate creature and gore effects, but dialog and plot elements were also lost, giving the film a rushed and sometimes jerky feel.  It doesn’t help that the least interesting part of the story, Boone and his struggles, are the focus of the film-we only get glimpses of Midian, its history and its residents.

Is it really a surprise that David Cronenberg is the most creepy thing in this movie?

The film’s elaborate effects are its greatest asset, and if there is a better argument for practical effects over CGI, I’m not sure there is one.  Yes, filmmakers can now (in theory, at least) create nearly anything they want out of CGI, but creating something out of CGI that looks this good requires vision and restraint, two characteristics that are relatively rare in Hollywood.  The actors range from the bland leads to the truly brilliant casting of Cronenberg as the monstrous Decker (his dirty cloth mask with little buttons for eyes is easily more creepy than the entire latex menagerie of Midian), and it’s a testament to the casting that his scenes in and out of mask are equally disturbing.  Most of the rest of the cast is solid, but the occasional over-the-top, bat shit performances help to turn the film from what might be a dull be coherent story into an entertaining but cartoon series of “what the heck” moments.  Charles Haid’s (Altered States) performance as Captain Eigerman, for example, rapidly evolves from a seemingly reasonable small town Sheriff to a gleefully deranged and trigger happy Militia leader in the space of a precious few scenes, and there’s a small part with John Agar (The Brain From Planet Arous), of all people, as a senile old gas station owner that is easily his best performance.  While Nightbreed is no slam dunk, it is certainly pulpy “you will never see the likes of this again” fun, and well worth a watch.

Check out the trailer, which is actually only a little misleading: