Two sisters, the assertive Janghwa (Su-Jeong Lim) and the shy Hongryeon (Geun-Young Moon) arrive home from a stay in a hospital.  Their icy stepmother Eun-joo (Jung-ah Yum) and distant father Bae Moo-hyeon (Kap-su Kim) greet them without alluding to what happened to land the girls in the hospital.  There is definitely something wrong, both with the family, and with the house they live in, which seems to be haunted…

A Tale of Two Sisters is, at its best, a masterful suspense film, creating tension both with the family dynamic on a domestic level, and with the glimpses of wrong things in the corners and backgrounds of shots that occasionally explode into full, terrifying encounters with the supernatural.  Writer/director Ji-woon Kim makes effective use of both levels of tension and of ghost story elements to craft scenes that will leave you on edge-and occasionally will leave the viewer feeling watching a nightmare unfold but being unable to do anything about it.  Kim’s film is full of beautiful but haunting images, and a sense of dread and impending doom pervades the film, as does a feeling that things are not right. 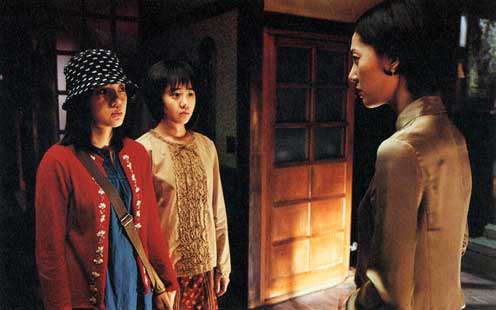 The Korean cast "Blossom" was much darker than the original

Unfortunately, one of the sources of tension-exactly what is happening in the house and between the family members-isn’t completely explained by the obligatory end revelations, which use the most tired of 2000s clichés, the character who you spend the movie with who isn’t really there.  A Tale of Two Sisters twist is perhaps more forgivable as it is in a film that is otherwise excellent and because the ghost story genre is more forgiving than, say, biography, but those tired of that particular device may find it irksome.  A Tale of Two Sisters is based on a Korean folk tale and some of the images and events call back directly to the original tale but may seem random to the casual viewer.  A must see for ghost story and Asian horror fans.

Buy or Rent at Amazon.com