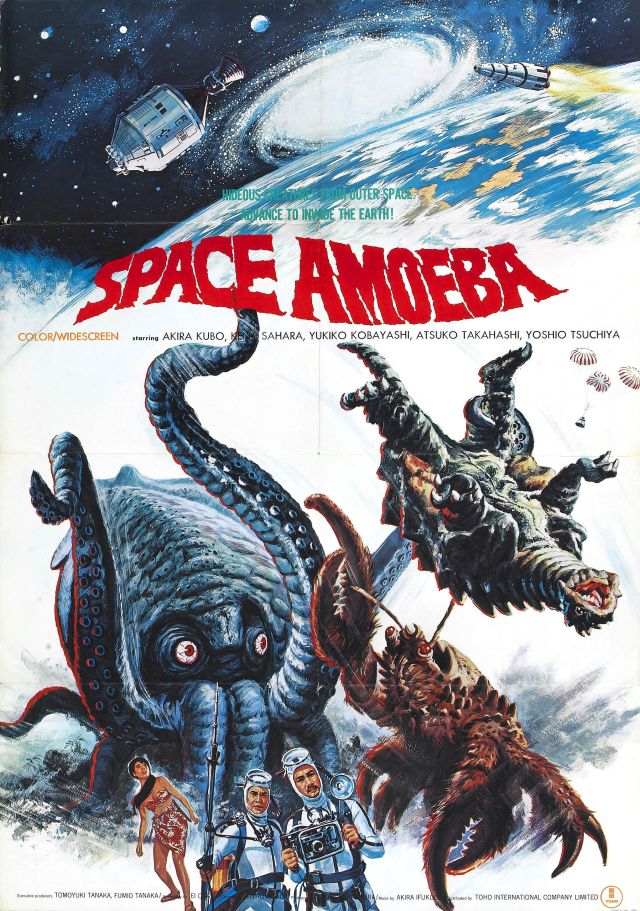 Glowing blue fog intercepts a space probe on its way to Jupiter and the probe returns to Earth.  Photographer Taro Kudo (Akira Kubo, Matango) sees the probe touch down, but no one believes him.  When a company seeking to create a resort on an isolated island wants to hire Kudo, he balks-but when he sees that the island is located exactly where he saw the probe crash he eagerly signs up.  Joining him are Ayako Hoshino (Atsuko Takahashi, Destroy All Monsters), the beautiful company rep and Dr. Kiyochi Mida (Yoshio Tsuchiya, Frankenstein Conquers the World), who’s been hired to catalog the fauna and flora of the island before the developers arrive.  The doctor also plans on investigating stories of monsters on the island.  Shipboard the trio meets Makoto Obata (Kenji Sahara, The War of the Gargantuas), who claims he is an anthropologist going to the island to study the native population, but even in a silly kaiju film, it’s hard to believe there are many anthropologists who wear white suits with pink shirts, gold cuff links, sunglasses and snappy hats out on field work.

A giant “octopus” (actually a giant squid) grabs one of the company men when he goes fishing in an area forbidden by the island’s head man (Tetsu Nakamura, Latitude Zero).  By the time our intrepid Scooby-Gang arrives on Mystery Island, they find the remaining company man Yokayama (Chotaro Togin, Godzilla vs. the Sea Monster) completely out of his gourd, while his native servant Rico (Noratake Saito, Godzilla vs. Gigan) angrily tells them to leave.  They do not, of course, and soon they are working on a mystery:  what is the blue glow they see in the water, and how and why is it embiggening native animals (a squid, a turtle, and a crab) and directing it against them?  Will the Doctor’s knowledge of biology and the cache of weapons Japanese soldiers left on the island during the war be all they need to defeat the alien force and save the human race? 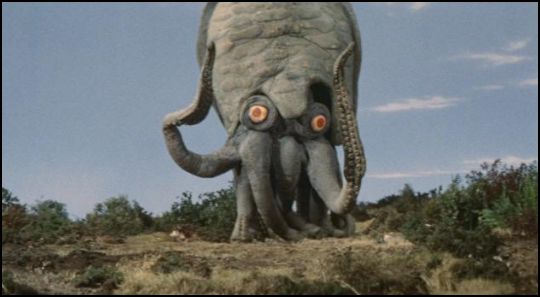 …and this is your squid on drugs. Any questions?

Space Amoeba was rarely shown, and for a lifelong Toho fan presented a certain allure due to its rarity.  Most of the Toho rarities, however, are rare for a reason:  they weren’t all that good to being with.  Oh, sure, the odd film like Matango:  Fungus of Terror aka Attack of the Mushroom People is fascinatingly bizarre, hardly a  classic but well worth a look for those seeking something a bit…different…but the majority of the films are failed co-productions in unfamiliar genres (see Latitude Zero for an example) or failed attempts to take the kaiju formula in a new direction.  Space Amoeba takes a Twilight Zone or Outer Limits premise (aliens use our own space probe to come to Earth and conquer us by body snatching) but kaiju’s it up by having the aliens spend most of their time grabbing animals and giant-sizing them.

Aside from this somewhat outlandish premise, writer Ei Ogawa and director Ishiro Honda (Varan) serve up a bunch of Toho-kaiju film clichés, warmed over.  We get the natives doing a little song and dance number to appease their monster gods (everything from Gojira on, but especially the latter appearances of Mothra in films like Godzilla vs. the Sea Monster), only, if the monsters come from a space capsule dropped in the last month or so, why are there rituals devoted to them?  There’s the convenient weapons cache, which gives our heroes something to fight monsters with.  There are the clichéd characters-the all-knowing doctor in his safari gear, the personality-less cute girl, the superstitious natives, and the industrial spy, who is in the usual evil capitalist role (though, to be fair, he does it with more flair than most and in the end is heroically self-sacrificing).  Kudo is a bit of a departure from the usual square-jawed military and astronaut heroes of the first Toho kaiju cycle, almost counter-culture with his big goofy hat and free-spirit, who is just out to take some good pictures.  We get aliens defeated by sound waves who lose control over their giant monsters (Monster Zero).  The monsters then begin to battle while a volcano explodes around them and consumes them (War of the Gargantuas, Rodan, Frankenstein Conquers the World).  Even the monsters are somewhat rehashes-the killer octopus from King Kong vs. Godzilla and War of the Gargantuas, the crab (lobster? shrimp?) from Godzilla vs. the Sea Monster and, if a turtle was new to Toho, it was not new to the kaiju genre thanks to Gamera.

All of this reuse might be okay if Space Amoeba was energetic, but the film manages to make giant monster attacks and fights sleep inducing.  Some of the effects on the turtle and the crab are good, but the “octopus’, Gezora, is ludicrously silly, looking like a bishop’s hat that has sprouted legs and light-up googly eyes.  Toho’s effects were always better at depicting monster on monster combat than on monster-human attacks, so Space Amoeba features many scenes of tentacles picking up dolls and unconvincing blue-screen work.  The film feels like it was hastily put together with kaiju left overs and a lower than usual budget, with a much smaller cast and less ambitious monster work.  The lead actors all give their usual, professional performances (all were kaiju film regulars), but the slow pace and lack of excitement or novelty makes Space Amoeba only necessary viewing for rabid kaiju fans.

“But Japan is peaceful we have no weapons!”

The trailer, which really shows you all you’ll ever need to see of Space Amoeba, and implies that the film is a goofy comic romp, which it really isn’t (also, check out the eye blasting on the crab-for a film aimed at the kiddies, the monsters suffer gruesome fates):