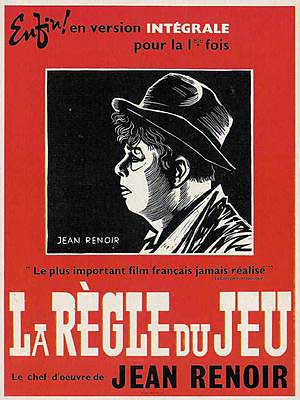 What It’s About: On the eve of the Second World War, the rich (and their servants) gather at a country mansion for a weekend of entertainments, including hunting, dining, dancing-and of course, various entanglements between members of both classes of people…

Why Watch it Today?: Jean Renoir, who directed and co-wrote The Rules of the Game, died today in 1979.  Although the film is considered one of the all-time great films, it provoked an angry response from many in 1939.  The French government banned it one month after its release, and when the Germans arrived they not only banned The Rules of the Game but destroyed many prints.  An Allied bombing raid destroyed the original negative but Renoir was able to reconstruct the film after the war.  The Rules of the Game is an excellent film, and one that gives us a small window onto French society (and its divisions) in 1939.  It also happens to be an enjoyable and highly influential film about people, their relationships and the rules we live by.

Where to Get It:   Netflix, your local library or Amazon