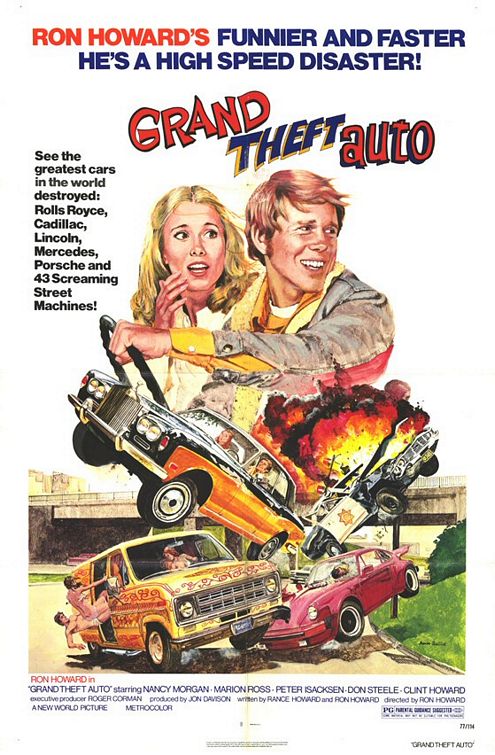 What It’s About: Sam (Ron Howard) and Paula (Nancy Morgan) want to get married, but Paula’s rich politician father Bigby (Barry Cahill) doesn’t approve, so the pair steal his Rolls Royce and  drive for Las Vegas to get married.  Soon Bigby, the suitor he hand-picked for  Paula, Collins Hedgeworth (Paul Linke), and a legion of weirdos are after the couple-and the $25,000 reward for stopping them.  Can these crazy kids manage to get married, and just how many cars will be stolen (and wrecked) by the time they do?

Why Watch It Today?:   Director, star, and writer of Grand Theft Auto, Ron Howard, was born today in 1954.  Grand Theft Auto was Howard’s directorial debut, the result of a bargain with B-movie producer Roger Corman.  Howard, then red-hot as the star of Happy Days, would star in two films for Corman’s New World Pictures and Corman would let Howard write and direct one of them.  Grand Theft Auto was a modest hit ($15 million world-wide on a $600,000 budget), and started Howard on his path to becoming one of the most commercial successful directors of his era.  Grand Theft Auto is a fun car chase comedy, with some great bits courtesy of Corman regular “The Real” Don Steele as, what else, a Greek chorus DJ.

Where to Get It:  Rent it at Netflix or buy it at Amazon.com