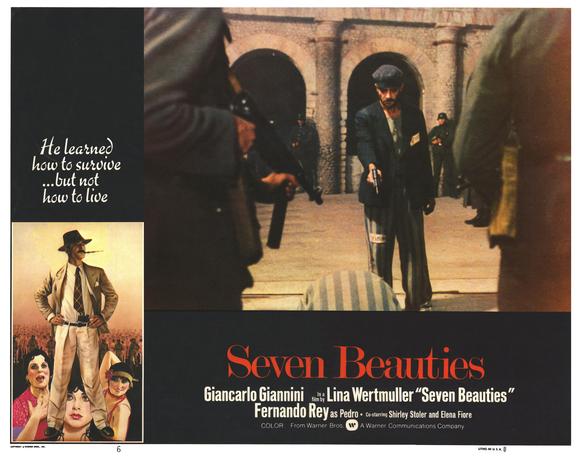 What It’s About: Pasqualino (Giancarlo Giannini) is an Italian deserter on the Eastern Front during the Second World War who is captured and put in a concentration camp.  As he attempts to survive the hell he in which finds himself, he flashes back on the journey that took him there, starting with his days as a small-time hood in pre-war Italy, saddled with seven ugly, unmarried sisters (the “beauties” of the title) and an exaggerated sense of honor.

Why Watch it Today?: Cult actor Fernando Rey, who died today in 1994, has a small but pivotal role as an anarchist that Pasqualino meets in the concentration  camp.  Seven Beauties is an alternately blackly comic and tragic film from writer/director Lina Wertmuller that is unlike any other film about the Second World War (and life and survival) you are likely to see.  Wertmuller received the first Best Director nomination given to a woman, as well as a nomination for Best Original Screenplay, while Giannini received an Oscar nomination for his powerhouse performance as Pasqualino, an idiot everyman, who makes it through the harrowing experiences of murder, prison, an asylum, the Second World War, and collaborating in a concentration camp and seems to learn nothing.  A must see.

Where to Get It:  Borrow it from your local library or watch it at Netflix, or Amazon

Surprisingly hard to find a trailer for this one, but here’s one of the great, early, happier scenes: