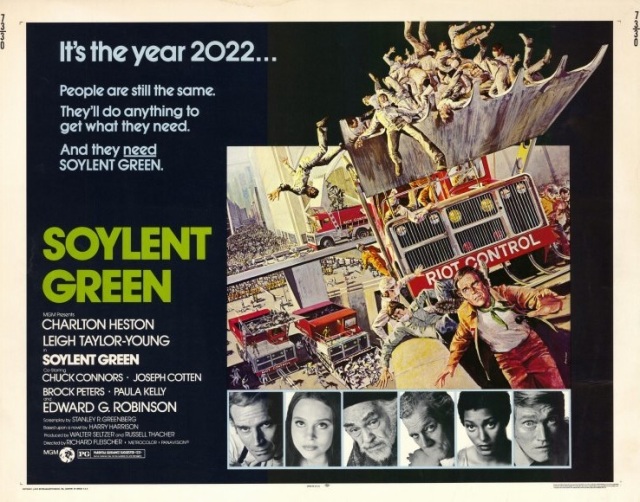 What It’s About: There are too many people (40 million in New York City alone), and not enough food.  When an executive (Joseph Cotton) at the Soylent Corporation, one of the last food supply companies,  is murdered, policeman Thorn (Charlton Heston) and his “living book” Sol Roth (Edward G. Robinson) race against time to find out the secret behind his murder-and behind the popular Soylent Green foodstuff.

Why Watch it Today?: Lead Heston died today in 2008.  Heston’s long career covered many kinds of films, but for genre fans of a certain age, Heston will always be synonymous with the series of distopian science fiction films he made in the late 1960s and early 1970s.  Soylent Green, while dated, is in some ways the most relevant of these today, as food prices rise and pollution increases, and features a fine, teeth gnashing performance from Heston along with the touching final film appearance of veteran actor Robinson.

Where to Get It:  Public libraries, iTunes, Netflix (Rental only) or Amazon