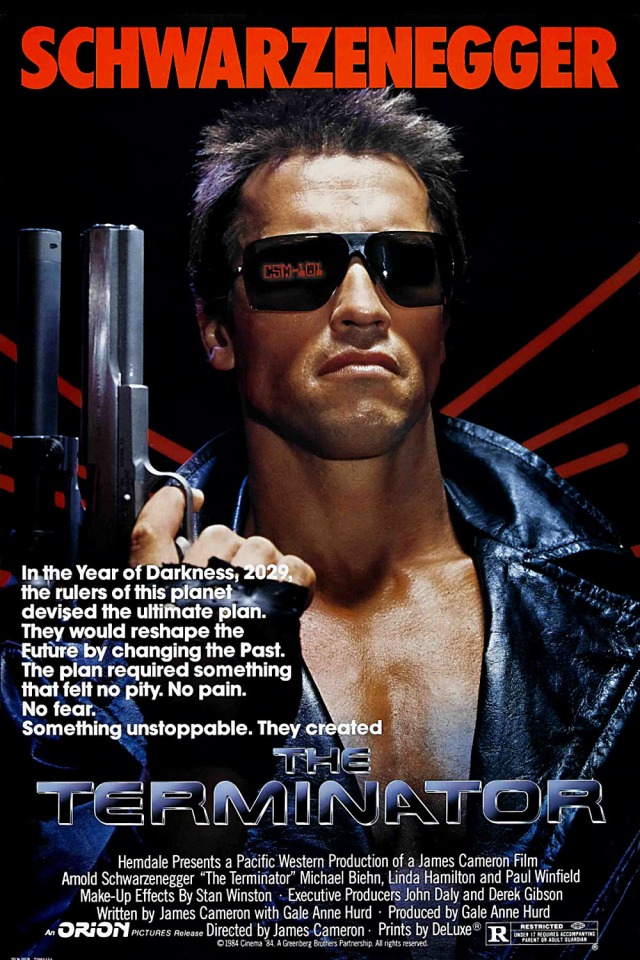 What It’s About: Sarah Connor (Linda Hamilton) is just a waitress in a greasy spoon now, but in the near future she will found the resistance movement that is humanity’s last hope against the computer Skynet.  That is, she will be if she can defeat the Terminator cyborg (Arnold Schwarzenegger) that Skynet sends back in time (to May 12th, 1984) to murder her.   Her only help is Kyle Reese (Michael Biehn), the soldier her future son  and hero of the resistance, John, handpicked to go back in time and protect her.

Why Watch it Today?: The Terminator takes place today….well, 27 years ago today.  One of the most influential sci-fi action films of all time, The Terminator made writer/director James Cameron’s career, helped make Schwarzenegger an icon, and created a new sub-genre of cash-ins  and rip-offs that featured an unstoppable alien/robot/cyborg from the future/a government lab/a junkyard chasing down the protagonist relentlessly.  Sure, Westworld beat The Terminator to the relentlessly pursuing robot attacker punch, but Cameron had the good sense to take the premise out of it’s “what if audio-animatronic robots at Disneyland decided to cold murder your ass” 1970s disaster movie context and put it in the present, with a single, female target and a seemingly crazy man helping her to survive (Halloween, anyone?).

The resulting film (helped by lifts from Colossus:  The Forbin Project and several episodes of The Outer Limits) is a tight thriller, with a good cast, great one-liners and action.

Where to Get It:  Netflix (rental only) or Amazon