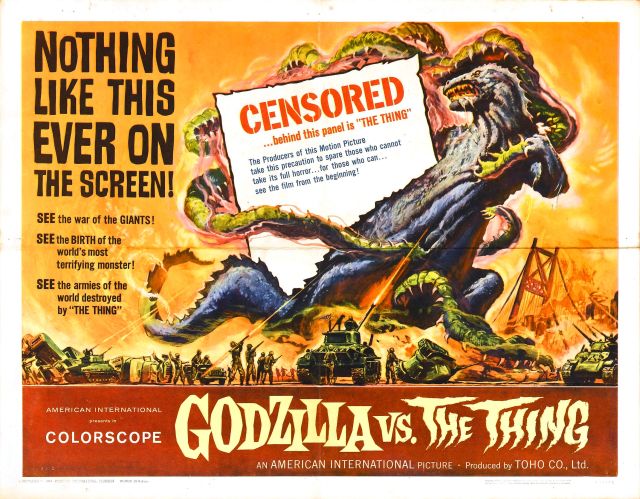 What It’s About: A massive hurricane blows a giant egg to Japan, where developer Kumayama (Yoshifumi Tajima) buys it and plans to put it on display.  The Shobijin/Twin Fairies/Peanuts/Dinky Divas (Emi and Yumi Ito) arrive and, with the help of reporter Ichiro (Akira Takarada), photographer Yoka (Yuriko Hoshi) and Professor Miura (Hiroshi Koizumi) try to convince Kumayama and his backer Banzo Torahata (Kenji Sahara) to abandon their plans-the egg just happens to be Mothra’s.  Kumayama and Banzo refuse to budge.  Then Godzilla reappears, having been buried by the typhoon.  When the military fails to stop him, can Ichiro, Yoka and Miura convince Mothra to fight Godzilla?  Can a giant moth beat a giant atomic fire-breathing reptile?

Why Watch it Today?:   When the U.S. military conducted hydrogen bomb tests over Bikini Atoll today in 1954, one of the unfortunate results was the contamination of the Japanese fishing vessel  Daigo Fukuryu Maru  (Lucky Dragon No. 5), sickening her crew.  The tests continued, resulting in contaminated rainfall and fish, and a Japanese anti-nuclear movement grew in response.  In addition to the political movement, the incident inspired several Japanese horror and kaiju movies.

Other Choices:  Gojira, The H-Man