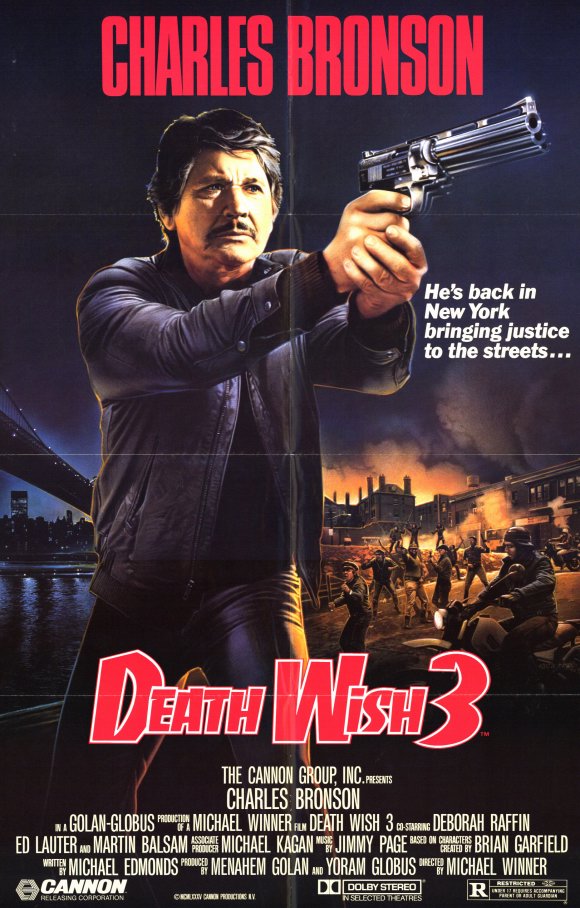 What It’s About:  Paul Kersey (Charles Bronson) comes back to New York to visit a friend-but finds him beaten to death by gang members.  A fed-up cop Richard Shriker (Ed Lauter) offers Kersey a deal:  Kersey can kill as many gang members as he can, so long as he keeps Shriker informed.  It’s not long before Kersey has organized the entire neighborhood to fight back-but can even a neighborhood defeat the army Fraker (Gavan O’Herlihy) recruits to take Kersey down?

Why Watch it Today?:  In one of the highest profile cases of the 1980s, Bernard Goetz shot four young men in a subway with an unlicensed handgun and claimed self defense.  Goetz was convicted of possession of an unlicensed handgun today in 1989 and sentenced to one year in prison.  Fears of crime continued to reach hysterical levels in the 1980s, and Goetz’s actions became first a rallying cry and then a warning for some, a cause of concern for others.  Like many in the 80s, Cannon Films, the notoriously opportunistic production company responsible for many of the worst (and most unnecessary) sequels of the 1980s, sought to make box office gold out of those fears and frustrated desires for an easy solution.  Cannon revived the moribund Death Wish series with this over-the-top shoot-em-up that substitutes action fantasy for  the original film’s almost thoughtful, almost plausible tale of striking back at the crooks responsible for skyrocketing crime rates.  The result is some of the most spectacular, unintentionally hilarious celluloid mayhem of the decade, with a visibly aged Bronson mowing down scores of opponents in the street with a machine gun and a ludicrously oversized handgun while a veritable horde of assailants lay siege to his neighborhood with everything from chains to grenades.  Come for the “before they were famous” gang members (Alex Winter, anyone?), stay for the old couple laughing with glee when the trap Kersey made for them takes out a gang members teeth!