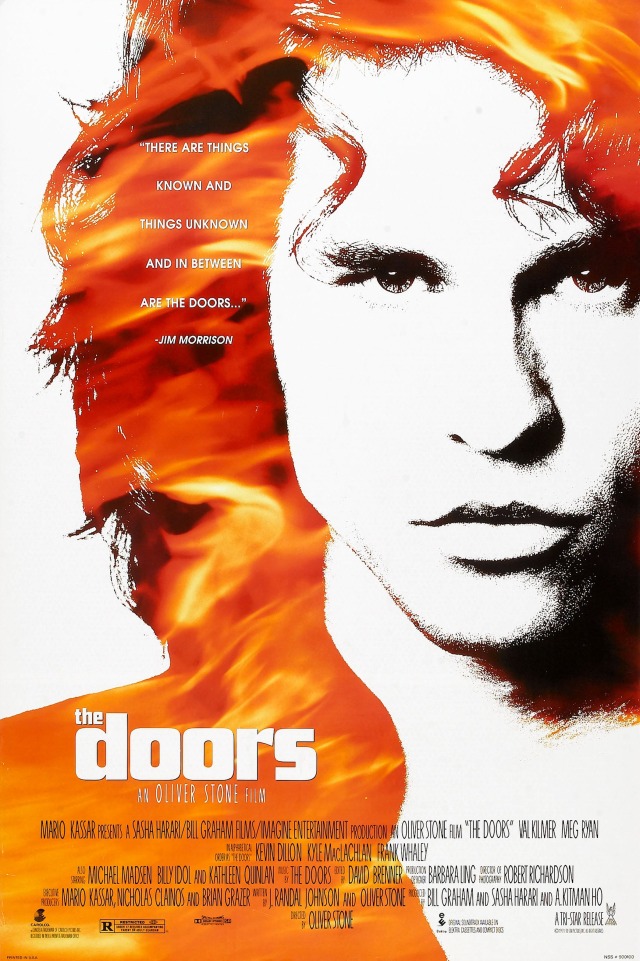 What It’s About: A sweeping, eclectic biopic that chronicles the rise and fall of Jim Morrison (Val Kilmer) and his relationships with his fellow members of The Doors, their music and excesses.  Oliver Stone’s preoccupation with the big picture issues of the Sixties filters through in the frequent references to Vietnam and fascist authority figures, but Apocalypse Now is a far better movie to watch if you want to think about serious issues while listening to some of The Doors’ music.  This film’s strength  lies in its weird devotion to bacchanalia.  Stone takes us along on Morrison’s acid trips and premonitions of death while careening between scenes of stiff impersonation (Andy Warhol… not impressive) and odd cameo (Morrison’s actual lover playing a Wiccan priestess presiding over a ceremony between Morrison and his lover; John Densmore as recording engineer).

While Meg Ryan doesn’t really look the part of Jim Morrison’s partner Pam Courson, Kilmer clearly devoted himself to learning how to pose, sing, and move like Morrison (only his pouty lips are out of place and seem to be impersonating Steve Tyler instead).  At times, Kilmer’s frenzied dancing is a perfect replica of archival footage; at other times, he steals a page from 1991 and crowdsurfs or swings about on electrical cables like Trent Reznor; and the closing credits reveal that Paula Abdul actually choreographed some of his scenes.

The music is, of course, great, Kilmer’s vocal imitations are serviceable, and it’s interesting to watch how Stone depicts the band’s creative process.  The drugs, booze and parties seem larger than life, but coupled with the supernatural interludes feel more like tragic mythology and less like a sensationalist made-for-TV special.

Why Watch it Today?: Ray Manzarek, the visionary keyboardist behind The Doors’ music, was born on this date in 1939.  Sadly, he passed away last May and is not around to celebrate his seventy-fifth birthday today.  This film is more focused on the mesmerizing presence of Jim Morrison; Manzarek made his own venture into film-making with the low-budget Love Her Madly (2000), but all signs are that screenwriting and directing were not his particular forte.  Manzarek was involved in at least one fantastic new venture in recent years, however: a 2009 collaboration with Weird Al Yankovic entitled “Craigslist.”  Here’s the finished version, and a video of Manzarek in the studio.

This is the fourth in my series of reviews of films that feature men wearing leather trousers.  Previously: Escape from L.A. (1996).   Plus, look out for Michael Wincott, the chief villain of The Crow, our first leather-pants flick, as The Doors’ producer Paul Rothchild.