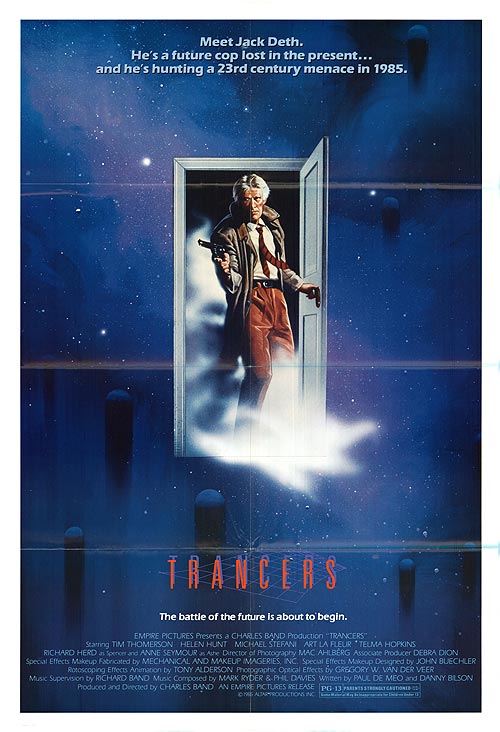 What It’s About: In the 23rd century, people drive retrofitted 1950s cars and everything is neon and mist (if you wanted neon and rain you’d be looking for Blade Runner). Jack Deth (Tim Thomerson) is a maverick cop who is adept at tracking “trancers”-victims of the intense mind control of Martin Whistler. When L.A.’s ruling council discovers Whistler traveled back in time to old L.A., hell-bent on killing the council’s ancestors, they choose Jack to stop Whistler. In the future an injection can send the user back in time to inhabit the body of their ancestor. In the 20th century, Jack’s ancestor Phil does something (what we have no idea), but whatever it was, it results in Lena (Helen Hunt) sleeping with him. Jack takes Lena to her mall elf job just in time for them to stop Santa when he trances out, dragging her into the fight against Whistler and his trancers.  After a series of missteps leads to the death of the all but one council-person ancestor (Biff Manard), Jack and Lena must find and protect him until they can stop Whistler…

Why Watch it Today?: Cult favorite character actor “That Guy” Tim Thomerson turns 68 today.  After appearing in many supporting roles Thomerson found himself briefly in vogue for lead roles low-budget sci-fi movies, the kinds of films that played cable constantly and stocked video store shelves (with box art they couldn’t possibly live up to) in the 80s, spawning ever lousier, ever more tenuously connected sequels.  Trancers is a great example of the genre, and of Thomerson’s appeal.  It occupies a space somewhere between “so bad it’s good” and “cheesy fun”, but you will enjoy it  if you don’t mind rolling with (a lot of) plot holes.

Other Choices: Thomerson was the perfect person to play the leader of cannibal 1960s beach culture loving  psychos in Cherry 2000 and is one of the cast of character actor bad asses that make up the cast of Uncommon Valor.