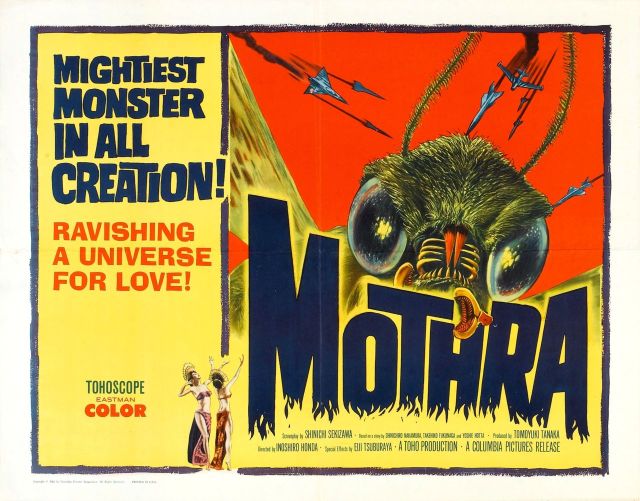 What It’s About:  Shipwreck survivors turn up on the island of Beiru, an island considered uninhabited after atomic tests.  They claim a juice given to them by the natives protected them from radiation.  A Japanese expedition, funded by Rolisican business man Clark Nelson (Jerry Ito), investigates the island. When reporter “Bulldog” Fukuda (Frankie Sakai) finds a pair of beautiful, foot high twins (twin singing duo Emi and Yumi Ito), things get ugly.  Nelson and his goons kidnap the twins and bring them back to Japan to perform in Nelson’s night club.  Unfortunately for him (and Japan), the songs the girls sing every night are actually psychically summoning their protector, the god of Biru Island:  Mothra.  Unlike most of your modern gods, Mothra doesn’t promise judgement and rewards in the afterlife:  no, she starts swimming to Japan to bring back the girls in the way that only a 50 meter long caterpillar can….

Why Watch it Today?:  The Nuclear Test Ban Treaty was signed today in 1963.  Mothra is a pretty transparent commentary on American nuclear testing and American chauvinism, with Biru Island standing in for Bikini Atoll, and “Rolisica” standing in for the United States, right up to when Mothra flies to “Newkirk City” to free her tiny charges from Clark Nelson’s clutches.

Other Choices: Them!, Godzilla, The Beast From 20,000 Fathoms