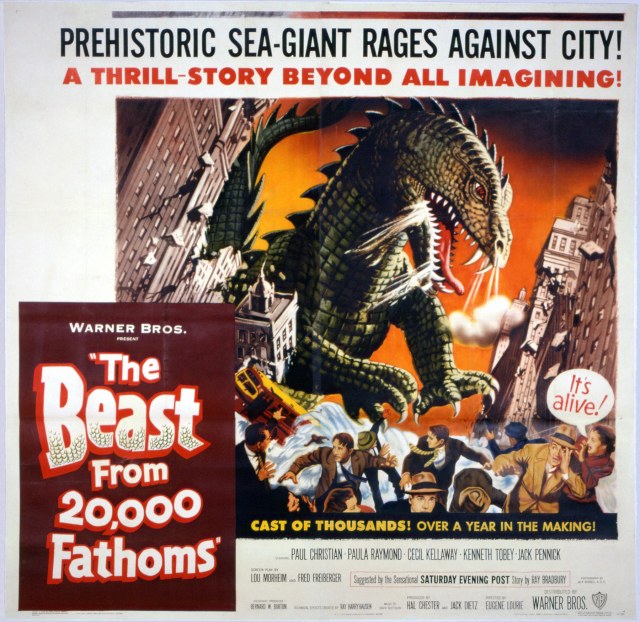 What It’s About: Stop me if you’ve heard this one before:  atomic tests in the arctic awaken a prehistoric beast, who begins attacking major cities in what was once his stomping grounds.  Unfortunately conventional weapons are out of the question (in this case because of a virulent disease carried in the Beast’s blood).  Can a method be found to stop the creature?

Why Watch it Today?: If that summary sounds familiar, it’s because The Beast from 20,000 Fathoms is *the* original giant atomic monster movie.  Just as King Kong (and its ancestor The Lost World) set the template for giant monster films to follow for years, largely on the strength of the then amazing stop-motion animation effects by Edmund O’Brien, The Beast from 20,000 Fathoms set the template for a wave of giant monster movies that followed, largely on the strength of the then amazing stop-motion effects by Ray Harryhausen (who worked for O’Brien on Mighty Joe Young).  Ray turns 92 today-a happy birthday to a man who enriched the childhoods of so many geeks with his fantastic creations!

Where to Get It: Amazon and iTunes; Netflix (DVD)

Other Choices:  We’ve previously featured Earth vs. the Flying Saucers, The Golden Voyage of Sinbad, Valley of Gwangi, and Clash of the Titans, all great examples of Ray Harryhausen’s work.