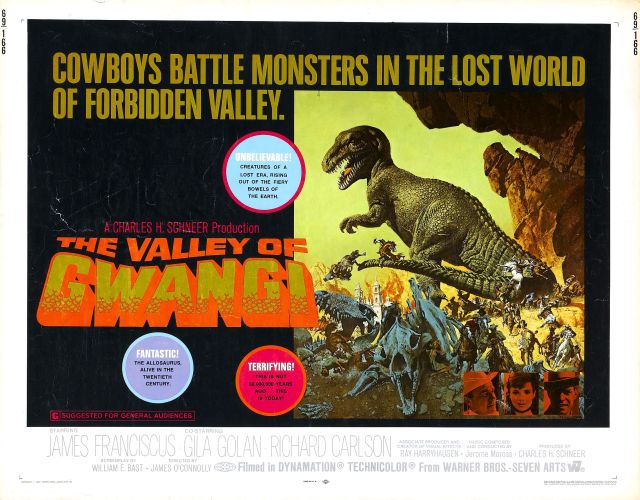 What It’s About:  When a struggling Wild West show stumbles upon the secret of a hidden valley in Mexico full of prehistoric creatures, they think they’ve found a gold mine.  Unfortunately, as we’ve learned time and time again since 1925’s The Lost World, you can take a dinosaur (in this case an Allosaurus called Gwangi by the locals) out of the lost word, but you can’t take the lost world out of the dinosaur.

Why Watch It Today?:  Star James Franciscus died today in 1991.  Although Franciscus found success on the small screen, on the large screen he was generally cast in films like Valley of Gwangi, where he played second fiddle to special effects, in lower budget foreign films (like Argento’s Cat O’ Nine Tails) or in films where the producers clearly wanted Charlton Heston, but had to settle for Franciscus, who looked and acted like the bigger star.  Beneath the Planet of the Apes might be the ultimate example of this phenomena, with Franciscus rehashing Heston’s Taylor role.  For all his second rung status, however, Franciscus is a reliable and enjoyable B-movie actor, and is solid in today’s film, where his nearest competition for star power is Richard Carlson of Creature of the Black Lagoon fame.

As for the real star of the film, the effects, they are once again provided by stop-motion god Ray Harryhausen, who gives us  more of his classic work, bringing to life fights between dinosaurs and cowboys, a miniature prehistoric horse, and a battle between a circus elephant and an Allosaurus.  Valley of Gwangi may not be a classic, but it’s a fun romp that answers that age-old question:  what if dinosaurs met cowboys?

Where to Get It:  Netflix(rental) or Amazon