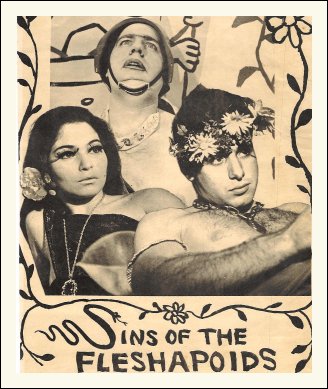 What It’s About: Long after a nuclear war the surviving humans live in decadence, served by robotic fleshapoids…but what will happen when the fleshapoids begin to think for themselves and develop feelings?

Why Watch it Today?: George Kuchar, who co-wrote and appears in today’s film as a human prince, died on this date in 2011.  Kuchar was an underground filmmaker and actor, working with is brother Mike to make very influential underground films that drew upon everything from melodrama to silent films to sci-fi and horror and made a virtue of extremely low budgets.  George taught film at the San Francisco Art Institute from 1971 until his death.  Sins of the Fleshapoids is one of the Kuchars more readily available films (you can find it on DVD) and, at just 43 minutes, doesn’t out stay its welcome.  If you get ahold of the DVD be sure to watch the accompanying shorts, which are also fascinating.