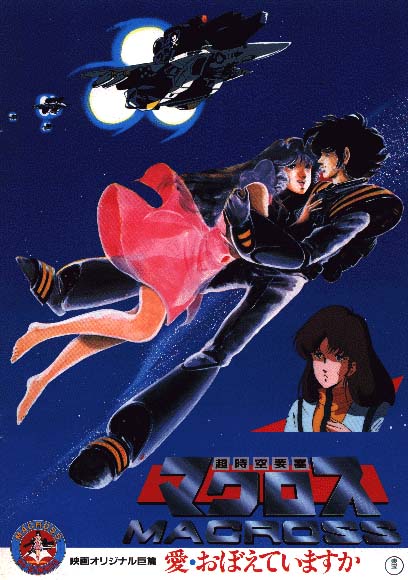 What It’s About: In the near future humans fly a rebuilt alien spaceship into battle against warring camps of giant, alien cloned warriors-the Zentradei, who are all male, and the Maltrandi, who are all female.  Can they discover the secret link between themselves and the aliens and use it to end the fighting before no one is left?

Why Watch it Today?: Macross, the anime TV show today’s film is loosely based on,  premiered on this date in 1982.  The show was a huge hit and was eventually brought to the US as part of Robotech, a series Frankensteined from 3 separate, unrelated TV series.  While the show is a classic, today’s film is a classic misfire, as it is hard to follow due to the compression of a 36 episode series into a single feature film.  Adding insult to injury, the producers decided to re-release dubbed into English with Japanese subtitles (in Japan) and, as such, the dub was done extraordinarily carelessly, leading to quotable terrible dialog (“WE ARE SPACE IMMMIGGGRRAAANNTSS!  SPACE IMMIGRANTS!” “A man….and a…wo-man?  Together?  This results from PROTO CULTURE?”) over often stunning animation.  You can read my full review here.

(Warning:  the trailer below has some NSFW nudity)

3 comments on “October 3rd, 2014: Chôjikû Yôsai Macross: Ai Oboeteimasuka aka SDF-1 Macross: Do You Remember Love? aka Macross: The Movie aka Macross in Clash of the Bionoids”