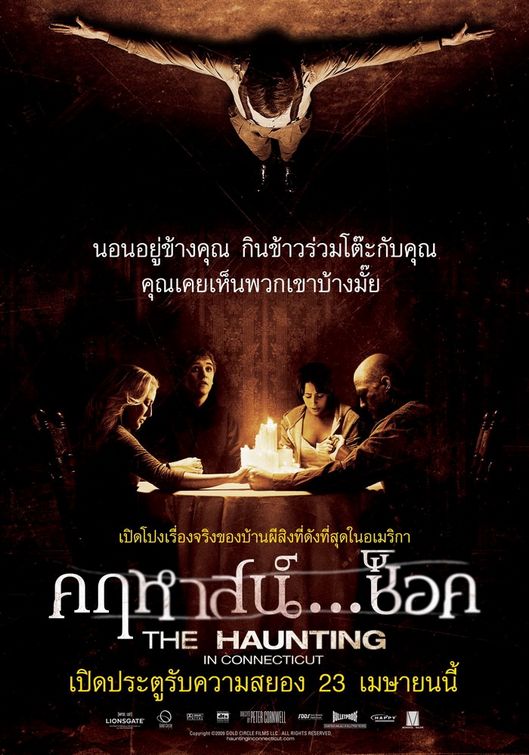 For a former resident of Connecticut, who could not remember this supposed “true story” being in the news, and knew that the film was actually shot in Manitoba rather than Connecticut, this promised unintentional comedy.  The box promises even more amusement since it says the film takes place in “Upstate Connecticut”.   No resident of Connecticut uses this term.  The state is hard to drive more than two hours in without crossing a border.  The idea of an “Upstate” is ridiculous, but perhaps “Upstate Connecticut” is where the equally fictional town of “Goatswood” is located, and perhaps it’s the part of Connecticut that looks most like Manitoba.  Unfortunately, there aren’t many humorous geographical errors.  For once we see a bit of the working class side of the state (for being shot elsewhere, the shots of run down houses while apartment hunting rang true) even if the locations are obviously made up names.  The one shot totally out of character with the state-huge expanses of fields, level as far as the eye can see-are “an 8 hour drive away”, though that ‘s lengthened due to a lot of vomiting, but I suppose they could be driving in from PA or upstate NY or something.

So, for residents and former residents of Connecticut who expect to see it badly misrepresented by Manitoba, the film is a flop.  How is it as a horror/ghost film?  Taken as pure fiction, which it surely is, The Haunting in Connecticut isn’t good enough to keep you interested, nor is it bad enough to watch for a good laugh.  Both the story itself and the way it’s told is nothing but ghost story boilerplate and swipes from other, better movies.  The story, for example, is completely lacking novelty for even casual ghost story fans-a troubled extended family consisting of parents Sara (Virginia Madsen, Candyman) and Peter Campbell (Martin Donovan, Insomnia), sons Matt (Kyle Gallner, Jennifer’s Body) and Billy, and niece Wendy and her daughter Mary-needs to rent a place closer to the hospital where Matt is getting experimental cancer treatments.  Sara finds the perfect place-perfect, that is, except for being a former mortuary, owned by spiritualists who conducted dangerous and arcane rituals with the corpses.  Once they move in, the usual strange things begin to happen, and it will take all of their strength as a family and some help from an odd Reverend (Elias Koteas, Teenage Mutant Ninja Turtles) for them to escape the danger of the house.

So the story is pretty ludicrous but one of the problems is how it’s told.  The film can’t seem to decide if it should go into complete, off-the-wall CG-fueled effects stuff that completely abandons the plausibility and creepy atmosphere building that most older, but more effective ghost tales used, or to stick to the plausible in an effort to sell this as a “true story”.  This means that majority of the film is family drama with some quick (but effective) jump scares and a few genuinely creepy moments (the shadow standing over Matt in his sleep that moves down into his body, for example) but without any sustained atmosphere that explodes into a series of “end of the ghost story” clichés in the last third of the film.  Attempts at plausibility are abandoned in favor of walls full of mummified bodies, visions of burned people, and computer generated attempts to duplicate those old “ectoplasm” photos.  It is also hard to sell this as a true story when repeatedly traumatized people don’t even attempt to remove themselves from the situation.  Right up until the last scenes of the film, Matt is sleeping downstairs across from the very place he’s having intense nightmares and visions about, for example, even though the home is enormous.

The other problem with the telling of the story is just how tired these clichés are.  We get the family dynamics from The Amityville Horror (formerly alcoholic out-of-work father who relapses during the film), the medical scenes from The Exorcist, the “frail old priest that knows about ghosts”, the shaky ghost from Stir of Echoes, and so on.  Worse, the film makes completely random references to better movies-the axe through the door from The Shining, the body covered in characters from Kwaidan (only cut into corpses instead of painted on-TO THE EXTREME!), and the names “Suspiria” and “Tenebrum” cut into a corpse.  Wow, first time feature director Peter Cornwell and/or writers Adam Simon and Tim Metcalfe (also responsible for the 2001 Snoop Dogg vehicle Bones) like Italian horror movies!  Or maybe they saw them on a website.  On top of everything else, this is yet another PG-13 horror film, which, like so many others, doesn’t learn from the censored horror films of the past, but instead makes a standard R-rated horror film but holds the violence.  You can only hope that Madsen and Koteas, both of whom are too good for this film, made good use of the paychecks they received.

Watching this film, one can make leaps of logic that would explain away the “true story” side of this.  A family in a very high stress situation (here cancer, apparently in real life mental health issues with the oldest son), with an alcoholic parent, moves into a mortuary and things go from there.  Up until the ridiculous (and completely made up, along with the spiritualist connection-necrophilia was much more trendy in the late 1980s and was the original explanation) ending there isn’t much that couldn’t be explained in this way.  Worse, the Warrens, everyone’s favorite Connecticut based “ghost hunter” frauds, who also cleared the Amityville case as authentic, were involved, and the author of the first book on the “haunting” later disowned it, saying he knew it was a hoax all along.  Reading up on this brought back memories of this story being on the air, and how quickly it sounded, well, as fake as it is.

The Haunting in Connecticut fails as a “true story”, as a horror film, as an unintentional comedic film, and even in bringing some amusement to a former resident of the state in the title.  Not worth anyone’s time.