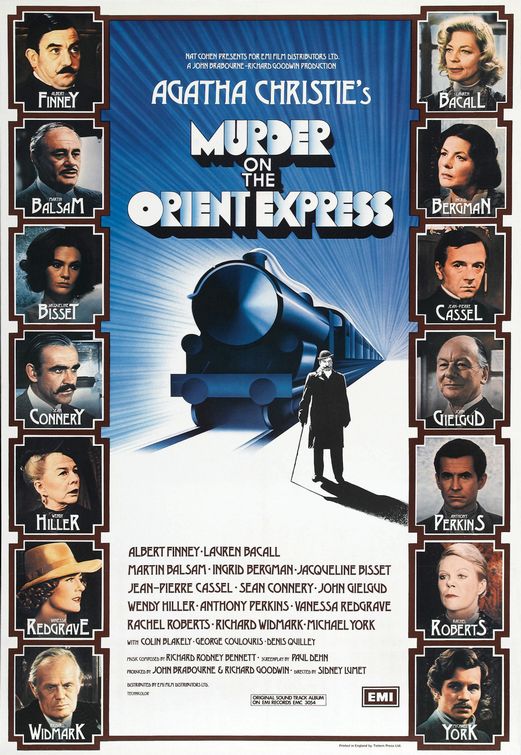 The early 1970s were a time when, like now, Hollywood was looking for ways to lure audiences back to the theaters.  A classic ploy in all eras is to simply pack a film with as many well-known actors as possible.  While Irwin Allen took this technique to ridiculous heights in his 1970s disaster films, others used a more subtle approach, as Sidney Lumet (Before the Devil Knows You’re Dead) does here, gathering eclectic but not ridiculous casts for ensemble films.  Working from Agatha Christie’s famous novel, Lumet gives us Albert Finney (Wolfen) as Christie’s odd Belgian detective Hercule Poirot, bound on the luxurious Orient Express from Istanbul to Calais.  Martin Balsam (The Stone Killer) plays Bianchi,  the owner of the Express and friend of Poirot’s, who just happens to be traveling on the same trip.  Jean-Pierre Cassel (Army of Shadows) plays the conductor of the train.  Lauren Bacall (The Fan), Ingrid Bergman (Dr. Jekyll and Mr. Hyde), Jacqueline Bisset (Bullit), Sean Connery (Zardoz), John Gielgud (Lost Horizon), Wendy Hiler (A Man for All Seasons), Anthony Perkins (The Tin Star), Vanessa Redgrave (Blow-Up), Rachel Roberts (Picnic at Hanging Rock), Richard Widmark (The Swarm), and Michael York (The Island of Dr. Moreau) play the passengers.

The train passengers, their train halted due to weather, suffer through Poirot’s impressions of famous chefs.

Widmark is Ratchett, an ill-mannered American business man who employs McQueen (Perkins) as a secretary and Beddoes (Gielgud) as a butler.  Ratchett offers to pay Poirot to protect him from whomever is sending him threatening letters, but Poirot refuses.  That night, however, someone murders Ratchett-and the train gets stuck in a snow drift.  Poirot only has until the train is moving again to solve the murder.  Which of the passengers is the killer (only Bianchi and a Greek doctor who spent the night in the dining car can give each other a solid alibi) and what is the motive?  How does the murder tie into the kidnapping and murder of the Armstrong baby which we see in the opening montage? 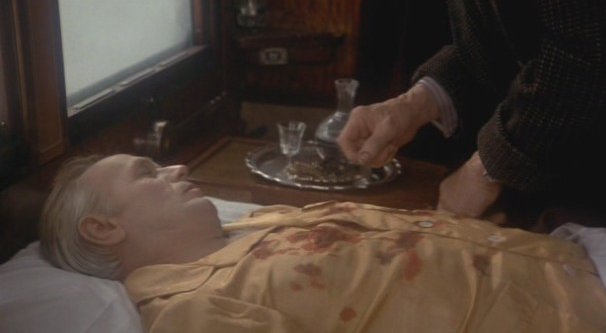 Widmark won’t be pushing anymore old ladies down staircases after this train ride.

Murder on the Orient Express is certainly a well made production of Christie’s novel.  The plot itself revolves around a fabulous twist that should not be spoiled, and the actors are mostly good and well cast.  Finney is wearing quite a bit of make-up to make him seem older, and it hampers his (Oscar nominated) performance.  Balsam is fairly implausible as an Italian business magnate.  York’s ridiculous curly hairstyle does all of his acting for him.  Bacall, Hiler, Perkins, Gielgud, Widmark, Roberts, and Cassel are all excellent in their parts (Widmark is especially good at being a cranky bastard you can’t wait to see murdered), and Connery and Redgrave are solid in theirs, if they are given less to do.  Bergman won an Oscar for her small role, and, while she is good, its hard to imagine why her performance was nominated, much less the winner.  Still, the only real problem with the film is the pacing, which is a bit slow and hampered by the clunky mock-newsreel opening flashback and the later flashbacks to earlier events.  These are minor complaints, however-Murder on the Orient Express is an enjoyable, star-studded whodunnit, which Christie herself liked best of the adaptations released in her lifetime.