One of the smaller sub-genres within horror is the evil kid(s) genre, which itself seems to subdivide into two groups:  films where the horror comes from a tribe of chilling children, supernatural or otherwise (Village of the Damned, The Children of the Corn,Would You Kill a Child? and The Children) and films with a single, rotten kid (The Good Son and The Other).    There are also films that skirt the edges of the sub-genre, such as The Omen, wherein the child doesn’t do much of his evil directly, but the bodies stack up anyhow.  All of these films play with society’s notion that children are innocent and basically good, but the difference in the two approaches is that the films with groups of children generally have some outside force corrupting the kids, be it alien, supernatural, or ecological, while the films with individuals focus on the idea that a child can be born “wrong”.  These kids are simply born bad and the child will do bad things no matter how much love, affection, and aid he or she is given by parents.  Both kinds can feature a secret in the child’s pedigree-they may appear to be their parents’ children, but somewhere along the line there is “bad” blood in their lineage-be it human, alien or satanic-that accounts for their evil nature.  The films play with our fear that not only is little Timmy not full of sweetness and light like other children, but that he is actually not even our son, but the son of another, and there is nothing we can do to fix him.

Rhoda (Patty McCormack, Frost/Nixon) appears to be a perfect child.  She is a prim-and-proper kind of girl who prefers a nice dress to blue jeans and sneakers; she gets good marks in school; she appears to love and respect her parents Christine (Nancy Kelly, a former child-star herself) and Col. Kenneth Penmark(William Hopper, 20 Million Miles to Earth).  She says all the right things, keeping her parents’ building owner Monica Breedlove (Evelyn Varden, The Night of the Hunter) firmly wrapped around her finger.   When the Air Force reassigns Colonel Penmark to Washington, and a classmate of Rhoda’s drowns under mysterious circumstances, Christine begins to question exactly how much of her daughter’s perfection is merely a façade…..

While films like Mildred Pierce, with its ungrateful, grasping witch of a daughter, provided the antecedents to the sub-genre, The Bad Seed sets itself apart by giving us, a child, not a teenager, that is not only playing her parents to get what she wants, but is willing to murder to do so.  In many ways The Bad Seed is reminiscent of Psycho in that it is more of a suspense film than a horror film, it featured a “do not reveal the shocking ending” ad campaign and unnecessary, clunky scenes discussing the psychology of the killer and it set conventions that would be adhered to for years to come.  One could even argue that Leroy Jessup (Henry Jones, Vertigo), the creepy janitor who sees through Rhoda whom she burns to death in his boiler room, inspired Freddy Krueger, the child killing janitor who dies in a fire in his boiler room.

The Bad Seed is the link between “Women’s Pictures” about bad kids-note the Colonel’s absence and the focus on Christine’s doubts and the ultimately terrible things she must do and endure-especially compared to later treatments of the basic concept which focus on and expand the horror elements.  This is most evident in the amount of time the films spends showing the impact of Rhoda’s behavior on Christine, and on her fears that her parents were not her real parents, especially when her father Richard Bravo (Paul Fix, The Sons of Katie Elder) enters the picture.  While there would be scenes dealing with the origins of the evil child in later films, they would never be played so  melodramatically.  Even more telling-and adding to the psychological horror of the film-are the scenes where we see the impact of Rhoda’s murder on the parents of her victim.  Eileen Heckart plays the boy’s mother in several harrowing scenes, arriving drunk to confront Rhoda and Christine. 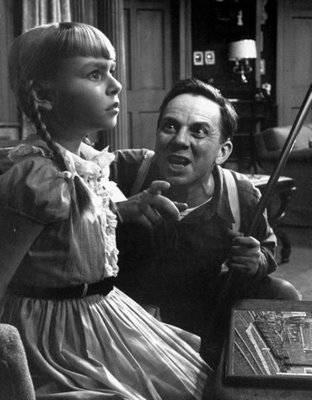 Seriously, just sticks some claws on this guy and get it over with.

The cast of The Bad Seed is excellent, hardly surprising since they starred in the hit Broadway play the film is based on.  While Patty McCormack is rightfully the most praised actor in the company, giving us a chilling child monster, the rest of the cast, with the possible exception of the incredibly bland Hopper, is perfect.  It is not surprising that Kelly, McCormack and Heckart received Oscar nominations (Best Actress and Best Supporting Actress, respectively).    The film is stagey, occurring mostly in the Penmark living room, unsurprising given its origins, but director Mervyn LeRoy (Little Caesar) delivers a great looking film with great performances by the cast, and cinematographer Harold Rosson (The Ghost Goes West) received an Oscar nomination for his work.

The famous cop-out ending the studio mandated does hurt the film, but it’s easy to see what originally happened and the “curtain call” for the cast that ends with Kelly spanking McCormack actually adds to the unease for modern audiences.  The lengths the film goes to satisfy the Code actually strengthens it.  Hearing Rhoda slowly reveal the details of the horrific murder of her classmate to her mother is far more powerful than just showing her do it, and seeing Christine’s reaction to Leroy’s death while hearing his  dying screams is far more disturbing than seeing a stuntman walk by in a flame suit.  There is a lot that is implied but it is that very atmosphere of fear and terrible  secrets that powers the suspense of the film.  The Bad Seed is a must-see for horror, suspense and, yes, “women’s picture” fans, especially fans that enjoy seeing the roots of genres.