September 19th: The Baroness and I watched Crooked House, my obligatory Agatha Christie story for this season (I wasn’t able to find the 1974 Ten Little Indians and somehow this ended up on my list instead).  I’d need spoiler space to get into which 1950s horror sub-genre foundational work this prefigures*, but in any case, Crooked House boasts a great cast and seems to have been inexplicably panned. If you like high production value adaptations of Christie’s work with actors like Terence Stamp, Glenn Close, Gillian Anderson, and Christina Hendricks, this is a lot of fun. (Yeah, technically this should’ve been part of the last post…somehow it got left out! In my house we blame Phoebe, the ghost from BVH’s childhood home-Editor)

September 24th: The Day the World Ended is where I checked off my “Roger Corman movie” box, and it’s a fun one. What if a group of atomic survivors gathered in a budget conscious producer’s suburban home with a pool, and ran afoul of radiation mutations both in their group (budget consciously depicted by exterior veins on his face) and later hints of a monster we barely see until the very end! This is preceded by some (budget-conscious) production drawings passed off as evidence of what REALLY happens when you  irradiate animals in Navy tests.  There is also plenty of in-fighting, as well as soul-searching conversations about character traits, what to do if they are the last people alive,  and the horrors of never being able to strip again for creeps!  We also get a big helping of creepy military dad creepy dadding, old time miner and his mule old timey guying and a budding “WHAT IF THEY ARE ADAM AND EVE” romance to round things out.  The Day the World Ended runs just over an hour, perfect to put on while you do dishes.

Grammy from Jill Gevargizian on Vimeo.

Grammy is a 2015 short from Jill Gevargizian that I caught as part of my ongoing effort to see 52 Films Directed by Women this year.  It’s a cute one, almost a gory Amelia Bedelia bit.  Reminded me of back in the day when cable channels would put on short films as bumpers and to fill out shorter films in 2 hour time slots. 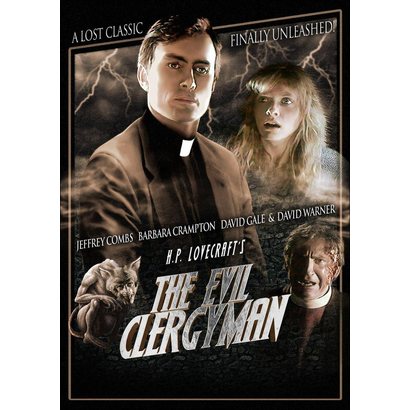 The Evil Clergyman was a 25 minute short meant to be part of the never released Pulse Pounders anthology by Charles Band, where each entry followed up a popular recent film of his with a short subject related to it or continuing it.  This was meant to follow up Band’s Empire Pictures Lovecraft films. It’s enjoyable mostly for the cast (Combs, David Warner, Barbara Crampton). It’s more than a little silly and feels not very much like Lovecraft, but it’s worth it for the last 3 minutes or so of Crampton’s performance. (spoilers at the end**)

September 28th:  We introduced the kids to Bedknobs and Broomsticks, which was a lot of fun.  Everyone loved the dancing and cartoon animals and MicroMort loved the knights, but I do wish we had the 97 minute version I grew up with.  Yeah, we’d have missed some of the dancing, but the rest of the restorations add little to the proceedings.  It’s never too early to introduce your kids to witches animating British military gear to kick Nazis though, that’s for sure. 🙂 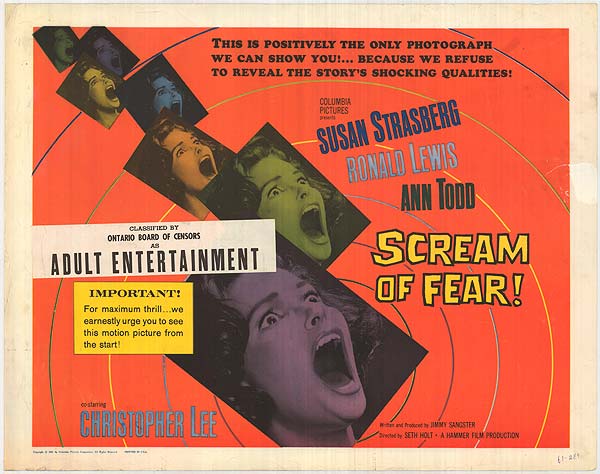 September 29th: I closed out pre-October fun with Taste of Fear aka Scream of Fear, the 1961 Hammer version of the kind of thriller pioneered by Diabolique.  There are a few good twists, it’s fun to see Lee as an urbane doctor who may be in cahoots with the possibly evil stepmother, there’s some crisp, moody black and white cinematography, but this just isn’t my bag so I liked but did not love it.  It was fun to have the Baroness with me for the ride and to get her commentary (on Lee: “Oh! and he’s a doctah!”), though.

*Killer kid reminded me of The Bad Seed.

**Crampton does an amazing Combs imitation that is very creepy.