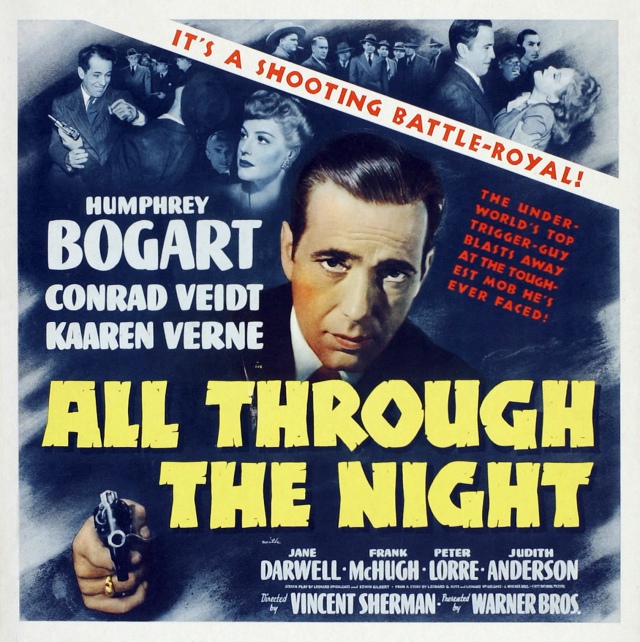 “Gloves” Donahue (Humphrey Bogart, Dead Reckoning) is a New York City gambler who heads a group of lovable but not particularly bright mugs.  We meet the gang as they are discussing the strategy Britain should take against Germany on a restaurant table using toys.  Gloves wants no part of this-but he is keen on Miller’s cheesecake, from old neighborhood, and he is disappointed when he discovers his restaurant doesn’t have any.  Miller (Ludwing Stossel, Casablanca) shows up late, with an excuse, and when he gets back to his bakery a sinister character named Pepi (Peter Lorre, Mad Love) arrives and kills him.  When Mr. Miller goes missing, Mrs. Miller and Gloves’s Ma (Jane Darwell, Gone with the Wind) ask Gloves to come look for Mr. Miller.

Luckily for our heroes, Film Nazis weren't that smart in early 1941

Gloves’ only clue about what happened is the brief of appearance of a mysterious woman (Kaaren Verne) who Ma later tracks down to a night club owned by a rival of Gloves’, Marty Callahan (Barton MacLane, Dr. Jekyll and Mr. Hyde).  When Pepi and his goons murder Marty’s partner Joe (Edward Brophy, The Thin Man), Gloves ends up on a wild chase all around the city, dodging the cops while trying to get to the bottom of a Nazi saboteur ring with the dubious help of his pals.

"So many guns in the Nazi party and so few brains"

All Through the Night is an oddity in many ways.  Released just five days before the Japanese bombed Pearl Harbor, it’s not quite a full-blown wartime propaganda film.  Gloves  and his friends do foil the Nazis, and come to the understanding that we need to do more about them, but they don’t, say, enlist in the armed forces en masse at the end.  Gloves represents the every man who just wants his cheesecake, but he, and the rest of the cast, eventually come together to defend America in a rousing finish. 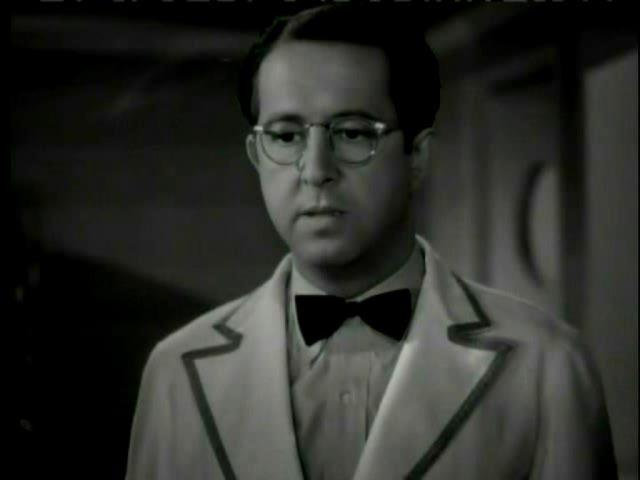 And you thought Phil Silvers was never young

Bogart was in a transitional place in his career, leaving behind his gangster and bad guy roles and moving towards more heroic, or perhaps anti-heroic, characters, and this is one of his relatively rare comedy parts.  He has a ball as the somewhat oblivious but snappy Gloves Donahue.  The cast includes many German refugees-in addition to Lorre, Verne and Stossel we get the great Conrad Veidt (The Man Who Laughs) as the head of the Nazis and Martin Koslack (The Flesh Eaters).  All Through the Night may have more character actors per minute than any other film-in addition those already mentioned, Frank McHugh (Mystery of the Wax Museum), William Demarest (Sullivan’s Travels), Jackie Gleason (Skidoo), Phil Silvers (It’s a Mad, Mad, Mad, Mad World), and Wallace Ford (Freaks) appear as Gloves’ men, and icy Judith Anderson (And Then There Were None) as Veidt’s second-in-command.  With a solid cast and some beautiful, Noirish black and white cinematography, All Through the Night remains watchable in the face of some very silly comedy (which sits poorly for a modern audience alongside Nazis and references to Dachau) and completely implausible moments, such as when Gloves and his right hand man Sunshine (Demarest) are able to keep Nazis at bay by simply speaking in German sounding gibberish.  The film also features an awful stereotypical African-American butler and a brief appearance by a Chinese cook.  All Through the Night is anything but sophisticated and aimed at getting the average Joe to pay attention to the news and wake up to the Nazis, but broad comedy is a strange delivery system for this message.

The trailer highlights how this is a transitional role for Bogart:
Trailer