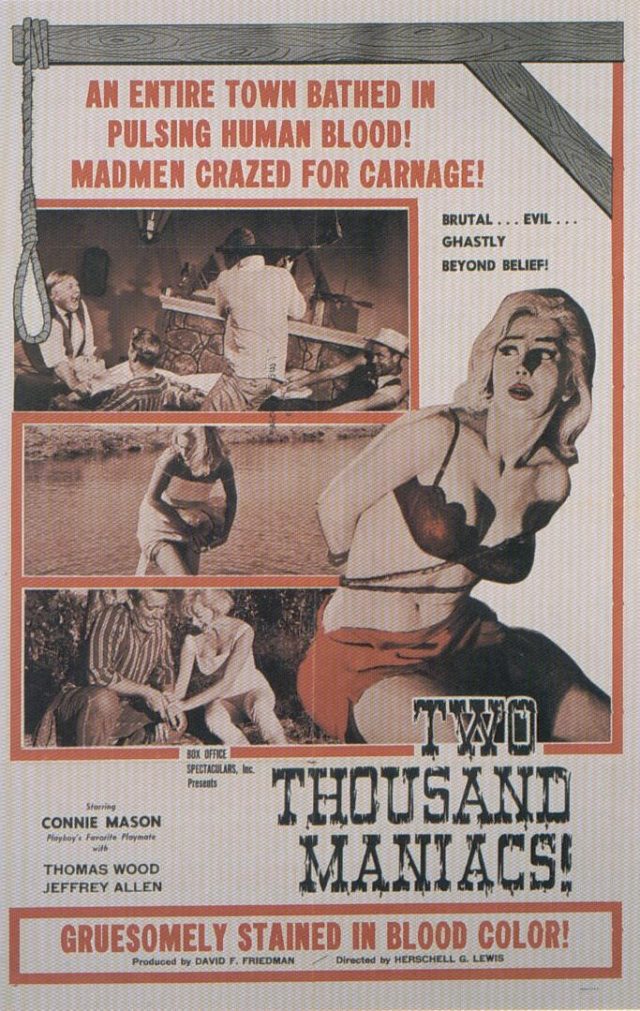 Herschell Gordon (H. G.) Lewis started out as one of the filmmakers in the 1950s wave of so-called Exploitation (also known as Nudie-Cutie) films.  Independent filmmakers made the films and carted them around the country to burlesque houses, urban, and drive-in independent theaters, anywhere they could get away with a lot of salacious advertising and lurid promises backed up by a few nude or topless scenes and little else.  Eventually audiences began to wise-up to the game the promoters were playing and competition got stiff (let’s face it, how hard is it to make a dud of a movie and throw in just enough nudity to stop prevent angry audiences from assaulting you but not so much sex that you get in real trouble with the authorities), so H.G. Lewis (and his producer, David Friedman) came up with the idea of selling violence instead of sex.  Blood Feast, the story of a cannibal caterer who worships an “Egyptian” goddess with blood sacrifices, was the result of this brainstorm.  The film cost just $25,000 to make but became a huge hit with the aid of Friedman’s old-fashioned ballyhoo and the novelty of its “gory” (red paint and mannequins) murders.  Two Thousand Maniacs, Lewis and Friedman’s next picture, is simultaneously ludicrously goofy and seriously nasty, especially if you stop and think about what happens in the film for more than a few seconds. 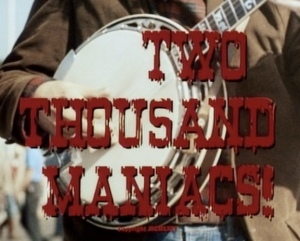 Terry Adams (Playboy Playmate Connie Mason, returning from Blood Feast) picks up Tom White (William Kerwin, another Lewis/Friedman regular), a teacher stranded on a deserted stretch of Southern highway by a break down.  Couples Bea (Shelby Livingston, Nude on the Moon) and John Miller (Jerome Eden, Blood Feast) and Beverly and David Wells are driving down that same stretch of highway while on vacation.  The film opens with two  yokels-one in a tree watching the road, the other hiding near a crossroads.  When a car with Northern plates appears (the young couples) the tree yokel gives out a big rebel yell and the road yokel quickly puts up a handmade detour sign, fooling the Northerners into driving into town.  Our yokels repeat the process for Terry and Tom, and the happy residents of Pleasant Valley greet the strangers, who they want to be their guests for the town’s Centennial.  Mayor Buckman (Jeffrey Allen), who leads the welcome party, seems friendly enough, but gets insistent when Terry and Tom suggest that they need to move on.  The young couples, especially the Millers, who quickly find locals to take interest in, seem content enough to sit back and enjoy the festivities.  The town will cover all expenses, the guests are given the best rooms at the local hotel, and town folk will provide escort to the Centennial events.  Of course, by now you’ve noticed that 1865, 100 years earlier than the film’s 1965 setting, is a very strange date for a Southern town to celebrate.  The  children in town swing around tiny nooses and everyone seems ready to let loose a big stage laugh every time they mention that the “Guests of Honor” are invited to the town’s big BBQ….. 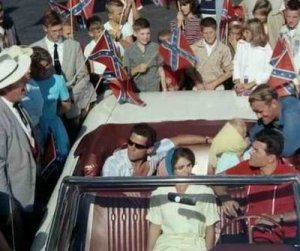 As a Yankee, this is not where I’d want to be….

Two Thousand Maniacs is an extraordinarily simple film-after the set-up, the film is mostly taken up by belabored flirting between country folk and the “sophisticated” Millers (the more square Mr. and Mrs. Wells seem well acquainted with their swinging habits), long set-ups for bad puns as the locals escort their “Guests” to deadly events like the Barrel Roll and the Horse Race, and “sleuthing” by Terry and Tom that makes the owners of the Mystery Machine look like Sherlock Holmes.  When Terry and Tom finally figure out what’s up, they make a break for safety, and we find out the truth-this isn’t a town of the descendants of a town attacked by renegade Union troops, it’s the ghosts of the victims, who will be return every 100 years to take revenge on six Northerners (why this exact number is unclear; one assumes it would take more than six to massacre a whole town).  Lewis and Friedman were apparently inspired by Brigadoon, but the antecedents of this idea-travelers encountering the ghosts of a tragedy reliving the events that transpired, as well as celebrations that treat the “guests of honor” badly-were well established in mythology and folklore.  Indeed, one could draw a parallel between the narrator in The Golden Ass, who arrives at a town and finds himself on mock trial as part of a festival where elaborate pranks are pulled on the “guest of honor”.  John Carpenter would later do more justice to this idea (even using the same number, six, for his victims) in The Fog, which also features a Centennial celebration, only in Carpenter’s ghost tale it is the visitors who come to punish the celebrants. 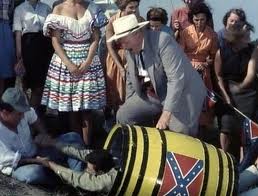 Gee, Pops Mortis’s Union picnics were never like this…

Two Thousand Maniacs is not a good film in any conventional sense.  Lewis skewers Northerners and Southerners alike, and seems unwilling to lose any money by judging either side too harshly or treating the idea too seriously.  The visitors are all stupid, sleazy, or just plain dull, while the residents are stereotypes-the two blood thirsty yokels, the blustery mayor, the dumb-but-attractive (or, at least the film would have us believe they are attractive) country tempters, and annoying children-and just as stupid as their victims.  The film plays both on Northern fears while it plays to patriots in the Southern audience with cheerful depictions of the “South rising again” set to the film’s goofy hillbilly theme song.  The film’s languid pace allows for the maximal padding and cost cutting, actors are often overdubbed, the gore effects are on par with what you might see at a high school spook house and the actors divide neatly into petrified wood and chicken fried ham, but Two Thousand Maniacs keeps a certain tongue-in-cheek tasteless charm and blackly comic humor throughout and will reward fans of the same.  The sheer audacity of Lewis and Friedman provides a certain amount of entertainment despite the quality of their product.  There’s definitely moments that flirt with going far beyond good-humored bad taste into nastiness, such as the BBQ scene which, intentionally or not, recalls the images of the burnt victims of lynchings taken in the early to mid-20th century and are nothing to joke about, so bear that in mind before you watch.  The first murder has a nasty “punish the sexually active woman” edge to it that is only slightly relieved by the fact that the woman’s husband-and, indeed, their dull friends-are executed in equally loving fashion.

The trailer, which includes all you really need to know about the film: