Greenberg features Ben Stiller (Meet the Parents) as a 41-year-old who still can’t quite come to grips with adulthood and the world around him.  He hasn’t married, doesn’t have kids, ruined his band’s chances at success in the music industry and is now a carpenter.  Well, he was a carpenter-he actually returns to L.A. from New York after a never fully explained stint in a mental institution.  Greenberg comes out to California, essentially, to house sit for his more successful brother (Chris Messina, Julie and Julia) who is taking his family to Vietnam on a business trip.  Greenberg is an unpleasant, unlikable man, with almost no redeeming qualities, and only his former best friend Ivan (Rhys Ifans, Little Nicky), seems at all happy to see him again.  Greenberg has vague notions of getting back together with old flame Beth (Jennifer Jason Leigh, The Hitcher) but instead repeatedly, awkwardly, and horribly hooks up with his brother’s personal assistant, Florence (Greta Gerwig, House of the Devil).  Florence is fifteen years younger than Greenberg, sweet, a bit strange, and in a vulnerable moment due to her last relationship just ending. 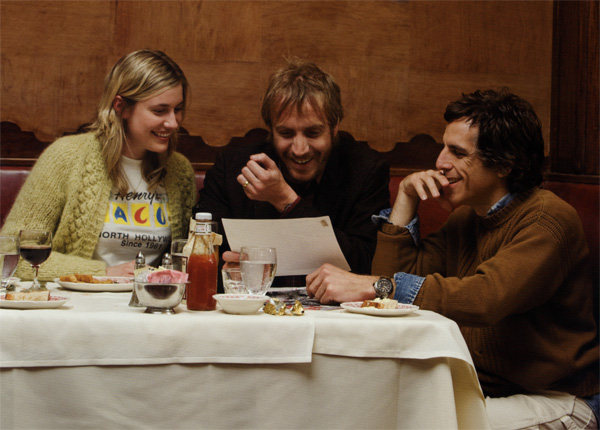 How, exactly, does one review a film like Greenberg?  Writer/director Noah Baumbach creates what is, essentially, a sequel to his first film Kicking and Screaming.  Kicking and Screaming was about (allegedly) witty college graduates who can’t quite leave the comfort and safety of their college after they graduate, and instead stay in the same scenes, tired of their lives but afraid to move on.  Greenberg is (more or less) what would happen if some of his characters from that earlier film were to get back together now.  Greenberg is unlikable because he’s supposed to be, and certainly the screenplay and Ben Stiller’s performance accomplish that.  The film is a character study without insight.  We never learn anything about Greenberg because he is far too guarded to let us see him, and, frankly, even if we could, there is no reason to want to.  The supporting cast is excellent, but we get very little information about their characters, even though we would love to spend more time with them than with Greenberg.  Instead, Greenberg is made up of awkward and depressing interaction after awkward and depressing interaction, until in the last act the film veers into middle-aged angst about the Gen Y/Millennial (and as someone who was born at the tail end of most ranges for Gen X who works in education, can I just say how bleeding tired of hearing about this) generation before finally coming to an ending that resolves nothing, but at least doesn’t end with a “bold dramatic choice that will redeem Greenberg!”

Greta, honey, get a new agent. You deserve better.

So what to make of Greenberg?  Certainly Baumbach accomplishes what he sets out to do-a character study of an intensely unpleasant character, ambiguous ending, going back to the spectacle of whiny Gen Xers no longer on the verge of adulthood, but on the verge of middle age.  Unfortunately, most viewers, myself included, want more of a reward for sitting through awkward scenes with a horrible man with a serious case of arrested development than the ability to observe “That Baumbach sure knows awkward and depressing pseudo-intellectuals!” and perhaps the small solace that Baumbach avoids using several clichés to end the film that he might have.  Greenberg leaves a film of failure and angst on whomever watches it, so be wary.