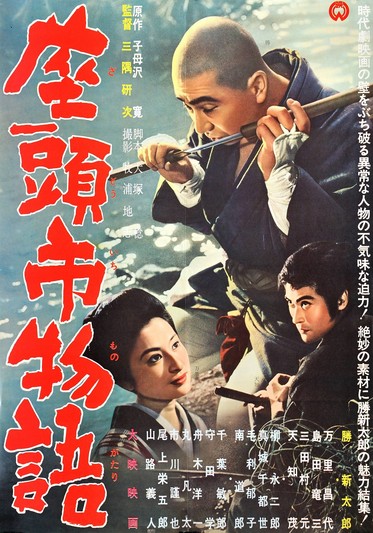 What It’s About: Zatoichi (Shintaro Katsu) is a blind masseuse in the Edo period (Ichi is his name; Zato is his title that indicates that he is in the lowest rank of the guild of blind men).  He’s also an expert gambler and swordsman, able to best sighted opponents.  When Zatoichi comes to a town embroiled in a war between rival Yakuza groups, Zatoichi is drawn into the conflict.

Why Watch it Today?: Louis Braille was born on this date in 1809.  What better way to celebrate the birth of the inventor of braille than with the first film in the long-running Zatoichi series whose 26 films, a four season TV series and remake with two sequels in the last decade make Zatoichi one of the most popular blind characters of all time?  The films feature the same themes-the peaceful Zatoichi is forced into conflict with an opponent who is also a noble individual trapped by circumstance.  The rigid social roles and rules of the period are responsible for the conflict, and the wily, low-status Zatoichi shows up his social betters.  Zatoichi is, in contrast to many samurai characters, a scruffy but wise trickster.  Although every film in the series contains at least one gambling and fighting scene, the focus is on the character of Zatoichi, and how he interacts with the other characters-and how he’ll manage to come out ahead in any challenge.

Where to Get It: Available to watch instantly on Hulu, for rental from Netflix, borrow it from your local public library or Buy Zatoichi at Amazon.com