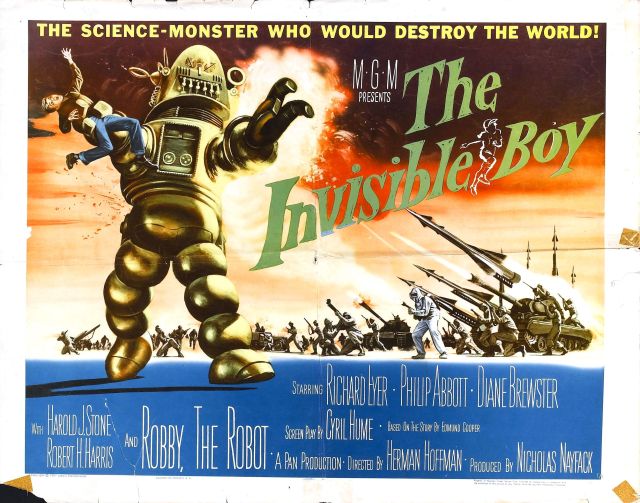 What It’s About: Timmie Merrinoe (Richard Eyer) is the son of computer expert Dr. Tom Merrinoe (Phillip Abbott).  When Dr. Merrinoe uses his Super Computer (Alfred Linder) to increase his son’s intelligence and learning, but the Super Computer has plans of its own. First he grants Timmie fun things like invisibility in exchange for reactivating Robby (Robby the Robot and Marvin Miller’s voice).  Super Computer’s ultimate aim is world domination, and our safety will rest on Robby’s robot shoulders.

Why Watch it Today?: Robby the Robot was “born” today in 1955, built for his appearance in Forbidden Planet.  Robby was a sensation, however, and MGM tried to cash in with The Invisible Boy, the odd film where a “robot” was the biggest star in the cast.  The film is an all over the place mishmash of genres, putting a happy kiddy matinée face on an A.I. story not far removed from those The Terminator and Colossus.

Where to Get It:  Libraries, Netflix, iTunes, or Amazon